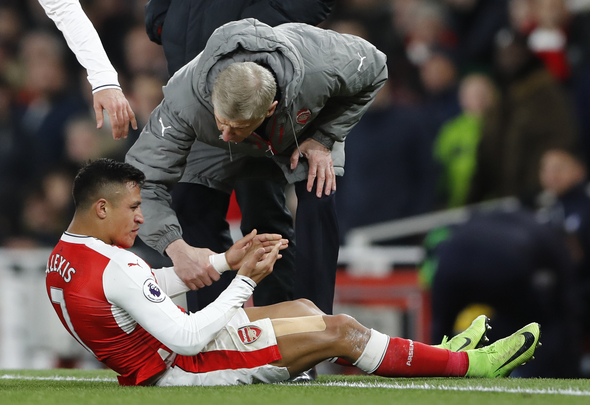 Arsenal boss Arsene Wenger has revealed Alexis Sanchez is set to face a fitness test to see if he will be available for their upcoming match against Sunderland on Tuesday night.

The 28-year-old limped off after 77 minutes at the bet365 Stadium in the Gunners 4-1 win over Stoke on Saturday.

Arsenal’s four goals came from Sanchez himself, Mesut Ozil and an Olivier Giroud brace, while Peter Crouch grabbed a goal for the hosts.

The result leaves Wenger’s side fifth in the Premier League, three points behind Man City in fourth, with only two games left to play.

Speaking in his pre-Sunderland press conference on Monday, Wenger issued an update on the Chilean’s fitness.

As quoted by arsenal.com, he said: “Alexis had a little kick on his thigh. [So he] will have a test today.

“Yesterday it didn’t look too good, but with him you never know. He’s so keen. Maybe it was just a kick. It could be a possibility that he recovers for tomorrow.”

The 28-year-old has been the Gunners’ star performer this season, and has bagged 21 goals and 11 assists in 26 Premier League outings.

However his form has not been restricted to the league, and in 12 FA Cup and Champions League games this campaign, he has provided eight assists and scored five goals.

Since signing from Barcelona in 2014 for £35million he has become Wenger’s key man and he has contributed to 11o goals (scored 68, assisted 42) in his 141 appearances.

Arsenal fans will be desperate for him to play as the Gunners look to claim an unlikely top-four spot.

In other Arsenal news, Ray Parlour has urged the board to sign up this attacking duo.