Michael Brown has urged Newcastle United to forget about the failed Saudi-led takeover and focus on football.

In a statement released last week, Newcastle claimed that Premier League had rejected a takeover bid that would have given Saudi Arabia’s Private Investment Fund (PIF) an 80% stake in the club.

In response, the Premier League said they were “disappointed” by Newcastle’s statement and it is “incorrect” that they had rejected the PIF bid.

And now Brown believes the club should put the incident behind them and focus on issues on the pitch.

He told Football Insider: “Somebody’s obviously asked the question to get a reaction and this is how it has escalated.

“I just think it needs to be put away if it’s not going to happen, forget about it and let them get on with the football.

“At the start of last season, it looked like all doom and gloom. I must say even though the takeover was possibly a positive in most people’s eyes, they’re in a way better place than they were last summer.”

Hendrick and Wilson both scored on their debuts as the Magpies began their Premier League campaign with a 2-0 win away to West Ham United on Saturday.

Fraser also scored on his Newcastle debut as they beat Blackburn Rovers 1-0 in the second round of the EFL Cup on Tuesday.

In other news, a top pundit has been left in awe by one Newcastle United man saying “what he’s done is superb”. 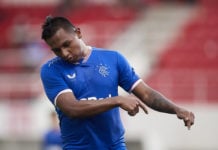