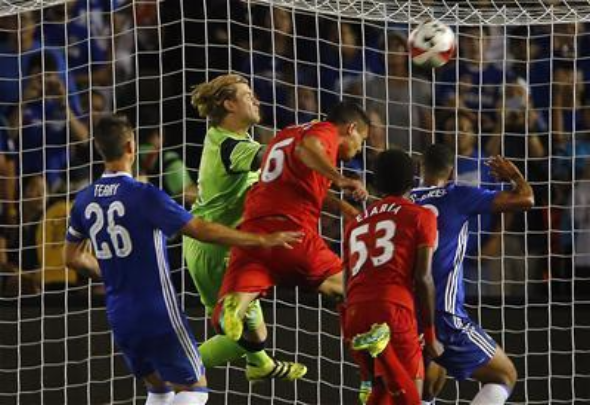 Jamie Carragher believes Liverpool goalkeeper Loris Karius is yet to convince him that he is of the required standard.

Jurgen Klopp’s side were beaten 4-3 at Bournemouth on Sunday afternoon, with the German shot stopper at fault for two of the Cherries goals.

The home side came from 3-1 down to win a remarkable Premier League match 4-3, with Chelsea loanee Nathan Ake grabbing an injury time winner.

German keeper Karius should have shown stronger hands when he allowed Steve Cook to level the scoring 12 minutes from time.

In the 93rd minute, the 23-year-old then failed to hold onto a shot which was bundled in by defender Ake, who sent the home fans into dream land.

Former Reds defender Carragher pulled no punches when he delivered his verdict on Karius and his performances since he joined the Merseyside outfit.

“This goalkeeper is yet to convince me in any game that he is of the required standard,” Carragher told Sky Sports 1’s live coverage of the match.

“Seven or eight games he has played now, still early days, who knows how he will be over the next two or three years. But there has to be a massive improvement from him. He has not done anything yet in those games that has impressed me.”

Karius, who was a summer signing from German outfit FC Mainz, has made nine Premier League appearances this season.

A fractured hand saw him miss the early part of the campaign, but he has kept Belgium shot stopper Simon Mignolet on the bench.

In his nine games, Karius has kept three clean sheets and the Merseyside club have conceded 18 goals during their 14 games.

The defeat at Bournemouth means Klopp’s team are now third in the table with 30 points from 14 games, four off leaders Chelsea, who beat Manchester City on Saturday.

In other Liverpool team news, Chelsea supporters on Twitter mock their rivals after they lose to Bournemouth.