Former Everton midfielder John Collins believes that Ross Barkley is some way off being a finished article.

Ronald Koeman has recently made it clear that the England international is looking to exit Goodison Park this summer, but Collins, 49, has suggested that there are still some fundamental flaws in his game that need addressing before he can reach greatness.

Everton star Barkley has been widely criticised for his fluctuating form in the club’s set-up over recent years, and Collins has that down to a lack of team work and graft.

“For me, sometimes he doesn’t run and work and sweat enough for the team; if he had Wayne Rooney’s attitude and desire then I would class him as our top player,” said the ex-Celtic man to TalkSport, as quoted on Alan Brazil’s Sports Breakfast’s official Twitter account on Thursday morning.

Ross Barkley has the skill to be a great player but lacks the desire to reach his true potential, says ex-#Everton man John Collins… pic.twitter.com/9BUJ886ZuZ

The Telegraph have reported that Everton have slapped a £50million price tag on Barkley due to interest in him from Tottenham.

The 23-year-old was a key part of the Blues squad that finished in seventh place in the Premier League last season as they qualified for a spot in the Europa League.

He scored six goals and supplied nine assists in 39 appearances across all competitions, but could become the second key player to depart Goodison Park this summer following Romelu Lukaku’s big-money switch to Manchester United.

Davy Klaassen has been brought in by Koeman, who plays in a similar position to Barkley, while it’s been widely reported that Everton have launched multiple bids in the hope of landing Swansea ace Gylfi Sigurdsson.

In other Everton news, the Toffees are planning to raid one of their Premier League rivals in a reported bargain deal. 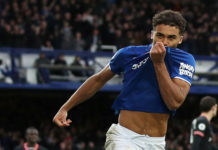