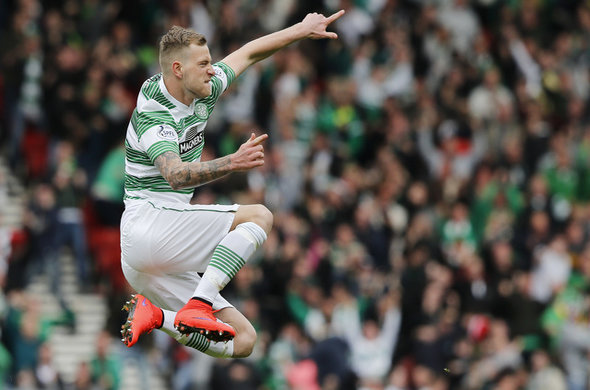 John Guidetti has revealed he told Celtic “I don’t think I owe you anything,” when the Scottish club asked him to sign a contract at the club two years a go.

The 25-year-old current Celta Vigo striker spent the 2014-15 campaign on loan at the Hoops from Premier League outfit Manchester City, where he scored 15 goals in 35 outings.

He helped the Glasgow giants win both the Premiership title and Scottish League Cup during his time at the club before heading back to the Manchester.

Now set to play in a Europa League semi-final clash against Manchester United on Thursday evening the Swedish target man has said he told Celtic he didn’t owe them anything when they asked him to sign a contract and that there was a subdued feeling when they won the league title given the quality of the rest of Scotland.

“I went to Celtic, smash it the first half [of the season], and then they said, ‘John you have to sign a contract.’ I said, ‘Listen, I don’t think I owe you anything’. Celtic’s a massive club but I like the big games. I don’t like — with all respect — Ross County away. When we won the league, we didn’t even celebrate, just walked round the pitch,” told Guidetti to the Times.

Guidetti completed a free transfer to La Liga side Celta Vigo in the summer of 2015 and he has since scored 20 goals in 80 appearances.

He has scored just twice in the Spanish top-flight this season in 20 encounters, while Celtic are still going strong in Scotland and now boast the lethal Moussa Dembele, who has struck 32 times in 49 outings in all competitions in his debut season for the club.

In other Celtic news, this Hoops striker chase has taken a bizarre turn.