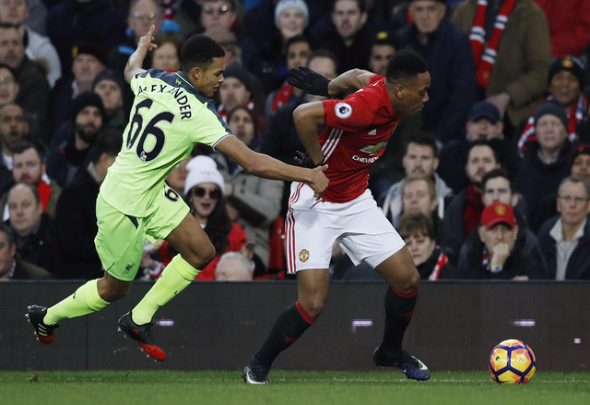 Jordan Henderson felt Liverpool were “unlucky” not to come away with all three points following their 1-1 draw against Manchester United at Old Trafford on Sunday.

Midfielder Henderson hailed the performance of right-back Trent Alexander-Arnold who didn’t look out of place in a big fixture despite making his full Premier League debut.

The 18-year-old, who was filling in for first-choice full-back Nathaniel Clyne, produced a mature performance for his side despite his relatively young age and lack of experience.

The Reds took the lead in the first half when James Milner converted from the penalty spot after Paul Pogba had handled in the penalty area.

United striker Zlatan Ibrahimovic headed a late equaliser as the north-west rivals shared the spoils in a feisty encounter.

After the game, Henderson felt his team deserved more from their display as he posted this message on his personal Twitter account.

Congratulations trentarnold98 on his full premier league debut!! What a performance!! 👏🏻 https://t.co/KlBFNrHB1l

Unlucky not to come away with 3 points! Thought the lads give everything but we take the point… https://t.co/RyV5YmUAYE

Henderson has played 22 Premier League and EFL games for Liverpool this term, scoring one goal and supplying four assists.

There have been three instances where the academy product has played the full match as he helped his team to two clean sheets during those games.

He could be on course to play his second consecutive full match for the senior side when Klopp’s team take on League Two Plymouth in an FA Cup third-round replay on Wednesday.

In other Liverpool news, supporters react on Twitter to the heated exchange between Graeme Souness and Jamie Carragher on Paul Pogba.