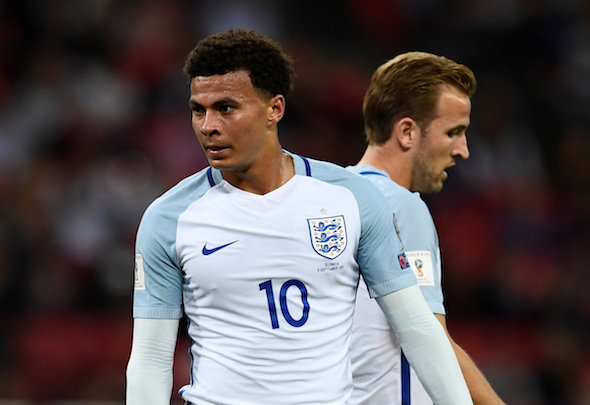 The Three Lions assured themselves a place in the biggest football tournament with a 1-0 win over Slovenia at Wembley Stadium in midweek with Kane notching up a last-gasp winner.

The strike means that the Spurs talisman has now scored six goals in his last five international games.

Alli was unable to feature in the qualifying match on Thursday evening as he was serving a suspension for an incident in last month’s game against Slovakia.

As quoted in the Evening Standard, former England boss Keegan is adamant that the nation can remain optimistic as long as both players stay fit throughout the course of the campaign.

“It’s important everyone stays fit,” he said at the ASPIRE4SPORT Congress & Exhibition.

“Not just Kane, but also Dele Alli. You want all your best players, and then you have got a chance.

“If you went to a World Cup and you took, let’s say, Johan Cruyff and Johan Neeskens out of the great Dutch side, people would not be surprised if they lost.”

Both Cruyff and Neeskens played an essential role in helping the Netherlands national team reach back-to-back World Cup finals in 1974 and 1978.

The Dutchmen managed to enjoy far more success at club level with both players lifting the European Cup on three occasions with Eredivisie giants Ajax.

Although the Spurs duo have yet to win silverware for their club, they have been influential in turning Tottenham into genuine title contenders over the past two seasons.

Kane and Alli might be involved in England’s upcoming fixture against Lithuania on Sunday afternoon.

In other Tottenham news, a Chelsea player has urged Barcelona to sign this Spurs ace.