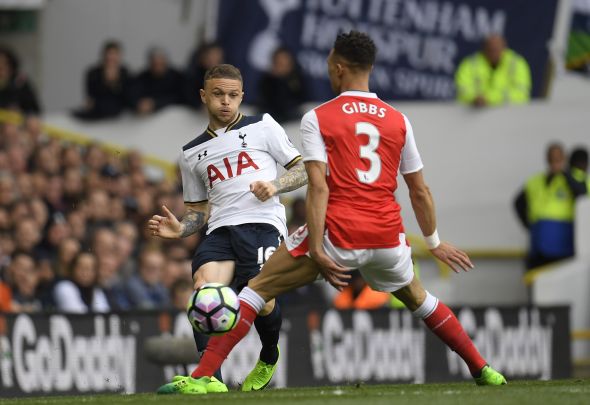 Kierian Trippier insists that there is a healthy rivalry between himself and Tottenham teammate Kyle Walker.

The two right-backs have been battling for a spot in Mauricio Pochettino’s first-team plans all season and will be competing with one another yet again on international duty as England prepare for a World Cup qualifier clash with Scotland on Saturday.

Walker, 27, has been used the most out of the duo over the last year, but has recently fallen out of favour in North London following a spell of poor form and doubts surrounding his Spurs future.

This allowed Trippier to earn a first-team spot and begin to blossom in Pochettino’s squad as they finished runners-up in the Premier League.

The ex-Burnley man has now suggested that the strong competition between him and Walker can only be beneficial towards them in the long-term.

“We are good mates and whoever plays, we are always there for each other,” said Trippier, as quoted by the Mirror.

“We always help each other and it will be no different here. I want to play and he wants to play but if he plays, I’ll help him. If I get picked, I know he will do the same for me.

“We have been playing with England since under-19s in the Euros so we have known each other for a long time and we always try and give credit to each other whoever plays.”

Trippier, 26, made 22 appearances across all competitions for Spurs in the recently-ended season, supplying seven assists.

The bulk of his game-time came towards the end of the campaign after playing just three league games until the beginning of March.

He is yet to earn a senior international cap with England and will be hoping to do so against either Scotland this weekend or in the friendly clash with France next week.

In other Tottenham news, Jermain Defoe has had his say on this Spurs 23-year-old.