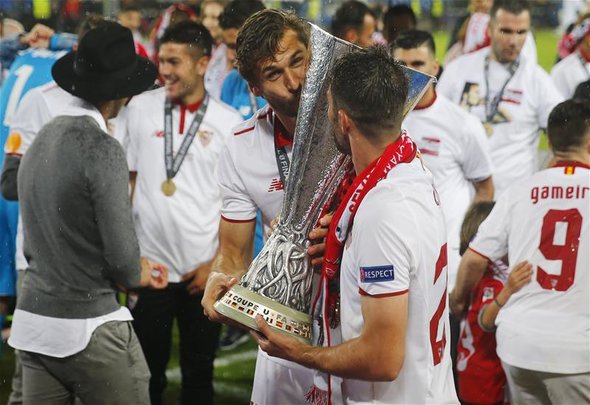 Everton are weighing up a move for Sevilla forward Fernando Llorente, according to a report.

The Spanish 6ft 5″ striker has just finished his first campaign with Sevilla but failed to nail down a regular spot and scored just eight goals last season.

ESPN FC claim that the Merseyside club are keen on a move for the player, who has two years left on his contract, and hope to take advantage of his fringe status at the La Liga outfit.

With Ronald Koeman resigned to losing Romelu Lukaku this summer it leaves the Merseyside club a little short in attacking options.

There will be a huge gap left by Lukaku if he leaves Goodison Park this season after he scored 25 goals in all competitions last year for the club, and they would be left with the relatively unproven options of Arouna Kone and Oumar Niasse up front.

Target Graziano Pelle elected for a move to China to play for Shandong Luneng which leaves Koeman still pursuing a new striker for his Everton squad.

Llorente would certainly provide some experience to the Everton squad after winning numerous trophies in his illustrious career already.

The 31-year-old has won the FIFA World Cup and European Championship once each with his nation Spain and has three Serie A titles to his name after a successful spell at Italian champions Juventus.

Koeman helped guide former club Southampton to a European place last season and will be striving to do the same at his new club, and Llorente could be the man to spearhead the Everton attack.

The Dutchman is also keen on adding to the midfield department and has been given the green light to reignite a move for Axel Witsel.

In other Everton transfer news, they are to annihilate a club-record transfer within days.