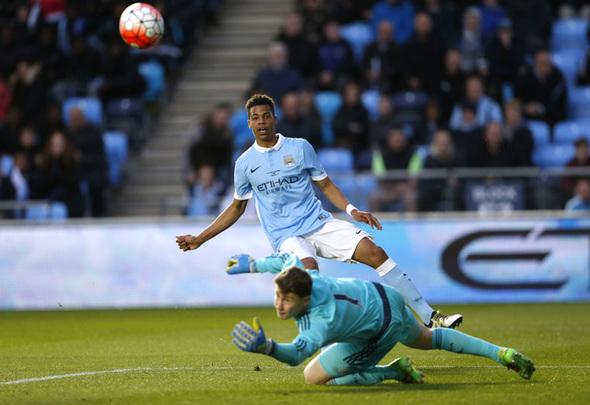 There is a more than decent chance that Celtic will be looking for a new striker this summer.

There is always speculation about Moussa Dembele’s future, whilst the Bhoys, as reported by the Scottish Sun, have a deadline of May 31st to sign Odsonne Edouard on a permanent deal for £10million.

If that price seems too unrealistic to pay, the Hoops could use the loan market again, and chief executive Peter Lawewell’s connections with Manchester City could see a player joining the Hoops from the Etihad for the second season running, after the signing of Olivier Ntcham last summer.

Lawwell’s son works for the English champions as a scouting information and content manager, and one player he would recommend as ideal for the Hoops is 19-year-old stiker Lukas Nmecha.

The England under-19 international made his first-team debut against West Ham in April, and the Manchester Evening News reported that a loan deal may be on the horizon for the player.

A move to the Hoops makes sense, as City will have saw how well Patrick Roberts did in his loan spell in Glasgow, and Nmecha will get a chance to pit himself in a competitive league rather then bit-part appearances here and there.

The move sounds like a no-brainer and it will be interesting to see if Brendan Rodgers decides to make a move for the player when the transfer window opens.