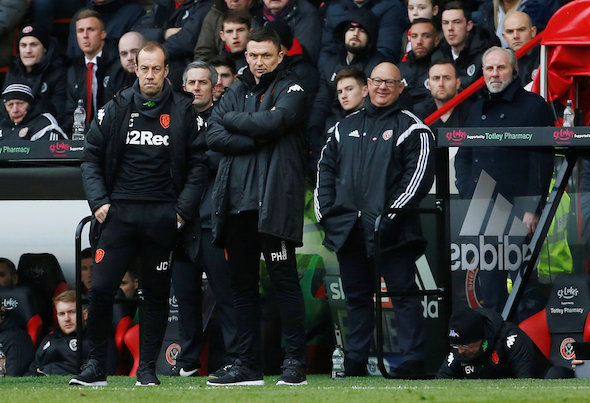 Leeds United manager Paul Heckingbottom has confirmed that he has given teenager Jack Clarke the chance to impress him in first-team training on Friday.
Clarke, 17, is yet to earn his debut in senior football, and Heckingbottom has detailed that his chances of doing just that will improve if he can prove to him that he deserves it.
The emerging Elland Road talent was on the bench for the 2-1 defeat to Newport County in the FA Cup Third Round last month and is clearly making shockwaves in the youth set-up by pushing himself in contention to play for the first-team.
Director of football Victor Orta has used a lot of time and resources in bolstering the development squads with overseas talent, so for a Yorkshire-born lad like Clarke to make an impression with both Thomas Christiansen and now Heckingbottom says a lot about his potential.
Speaking in his pre-match press conference ahead of Sundays clash against Bristol City, Heckingbottom has revealed that Clarke, as well as his teenage team-mate Tom Pearce, have been offered the chance to impress in first-team training, but has suggested there is still some way for them to go to play in the Championship.
“They’ve got to earn it,” said Heckingbottom, as quoted by LeedsLive [01:18pm].
“You’ve got to be relentless in what you want, so it’s won’t be given away.
“It has to be justified, there’s no easy things.
“Those two have been training with us today so I got a look at them.”
Pearce, 19, is still awaiting his senior debut.
The young left-back has had more chances to do that though by being named on the bench on three occasions this season.
In other Leeds United news, this Sky Sports pundit has claimed Radrizzani make a brutal below-the-belt remark after making a decision.
Don’t miss out on breaking and exclusive Leeds United news by clicking here for our brilliant 24/7 updates on Facebook, Instagram and YouTube.