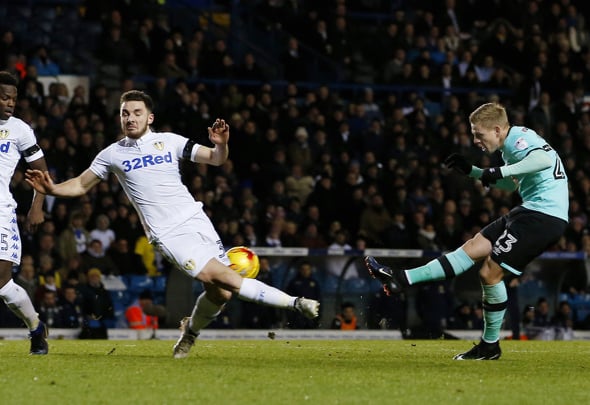 Lewie Coyle played the full 90 minutes of Leeds’ 3-2 defeat to Barnsley on Saturday – and fans took to Twitter to pan his performance.

The Elland Road academy product was named in the starting XI for the second consecutive match as Garry Monk was once again forced to field a makeshift defence.

With Gaetano Berardi at left-back for the sixth consecutive match, it was the same rejigged defence that contributed to the impressive 1-0 win against Derby eight days ago.

But the back line struggled to deal with the Barnsley attack in an enthralling Yorkshire derby after Chris Wood had given Leeds the lead.

Three goals in nine minutes from Barnsley trio Tom Bradshaw, Ryan Kent and Conor Hourihane put the homse side in control even though Wood gave his team some hope with a late penalty, his 19th goal of the season.

Supporters were critical of the performance of former Coyle, 21, who was making just his seventh appearance of the season.

Unfortunately Ayling, Coyle and Viera were at 6s and 7s. Duke and Roofe didn’t impact the game positively. #lufc

Coyle and Doukara have been poor tonight. I hate Doukara. #lufc

Coyle not quite there yet, struggled all game at right back. #lufc

Leeds’ defeat to Barnsley was their first loss since being defeated by Brighton on 9 December and ends their excellent form either side of the festive period.

Garry Monk’s side drop to fourth in the table after the last of the Saturday fixtures, with Huddersfield leapfrogging them to climb to third.