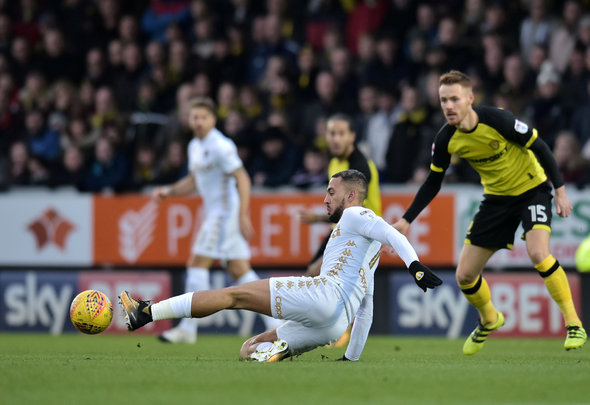 Leeds United fans have taken to Twitter to poke fun at striker Kemar Roofe after he was forced off with injury in the clash against Sheffield United.
The Whites went in to half time 1-0 down thanks to Billy Sharp’s second minute strike, which was a sublime volley past Felix Wiedwald after a poor clearing header from Eunan O’Kane, although Pierre-Michel Lasogga levelled the scores early in the second half.
After the disappointing opening minutes, new Leeds manager Paul Heckingbottom saw the half endfirst 45 minutes with yet more bad news, with striker Roofe forced to be substituted just before the half time after suffering an injury blow earlier in the clash, with the Yorkshire Evening Post journalist Phil Hay claiming on his personal Twitter account that he may well has suffered concussion.

Concussion by the looks of things for Roofe. Looks dazed. #lufc

While there was the concern of yet another injury for Leeds to contend with, fans turned to social media to poke fun at Roofe, suggesting that he had been concussed long before the blow against the Blades.
Here, Football Insider has rounded up a selection of the supporters’ best tweets:

Looked dazed since the whistle blew to start the game

Was he concussed before the game or during? I can't tell #lufc

Is this a month long concussion?

Is this today or all season?!

He looks concussed most of the time anyway

He looked like that for ages. He's not good enough

https://twitter.com/thomas_wilson04/status/962313741667880960
The 25-year-old winger has been a regular in the Leeds first team this season, primarily utilised as a centre forward due to an injury crisis at Elland Road, and tops the club’s scoring sheets with 11 strikes in 30 appearances across all competitions.
In other Leeds United news, Heckingbottom’s unwillingness to upset the apple cart is cause for concern.