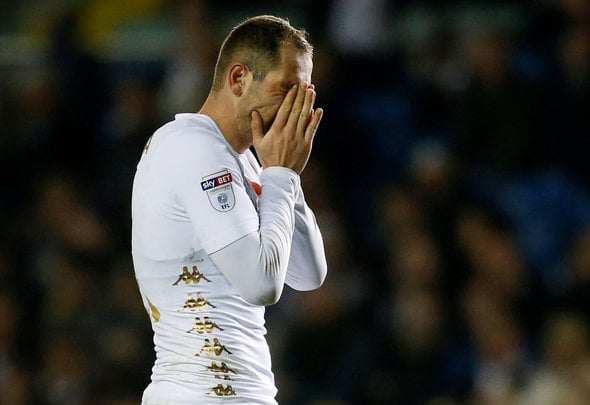 Leeds United fell to a 3-0 defeat against Middlesbrough at the Riverside in the Championship on Friday night on a hugely disappointing night for the Whites.

Tony Pulis’ side took the lead through Patrick Bamford in the 31st minute and the former Chelsea forward went on to score two more to put the game out of the Yorkshire outfit’s reach.

It was a difficult night for the Elland Road outfit, who had to face sub-zero temperatures in the north-east, and looked disjointed throughout.

From the goalkeeper to attack, there appeared to be no cohesion and the invisible performance of Pierre Michel-Lasogga was one that was noted by the Whites faithful.

The German forward was outnumbered by an imposing Middlesbrough defence and isolated by a midfield that was largely on the back foot – and he was also ridiculed for wearing leggings.

When the ball did find the attacker, for the most part, he was unable to find another man in white, giving possession back to Pulis’s side.

It’s now one win in ten games for Paul Heckingbottom’s team, who have yet to see the boost of the new manager, following Thomas Christiansen’s sacking last month.

Here is a selection of what the Leeds faithful had to stay on social media about the player’s poor showing:

Can Lasogga play in goal?? Might as well use him for something…

Lasogga wearingwhat appears to be a pair of Adidas trackies, Paul Heckingbottom's bright orange Leeds badge on his coat and that yellowy/lime greeny & blue keeper kit combo are my main concerns about Leeds United this evening.

Wielwald, okane and lasogga need dropped. What a poor first half #lufc

Unreal isn’t it. My friend Lasogga looks like he’s been under anaesthetic for 72 hours and he’s come round been released for an hour. Running around, not a clue what he’s doing why he’s doing it or how to do it right 😂

yeah, the team has been pummeled, the midfield can't control the ball. Saiz and Lasogga can't conjure a pass out of thin air.

Wielwald – Garbage, Anita- garbage, lasogga – useless @andrearadri you need to bring in EXPERIENCED championship players!!!!! It is a MUST ……. promotion is your target ……. Ye?????

Lasogga in net, and Ekuban up front please