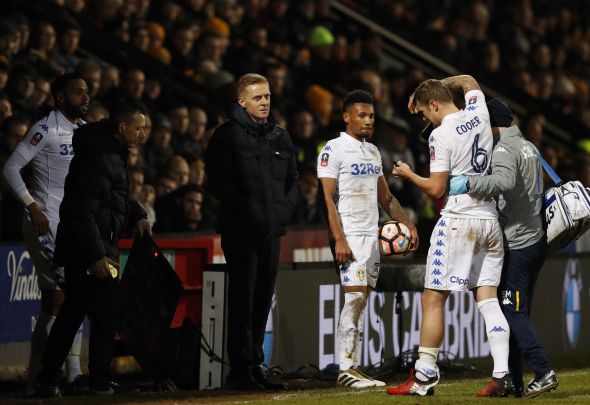 Liam Cooper was surprisingly selected ahead of Pontus Jansson for Leeds’ 2-0 Championship win over Brighton – and fans took to Twitter to hail his display.

Supporters and pundits were shocked that the Sweden international was omitted from the starting X1 in favour of Cooper and assumed he was carrying an injury or unwell.

But manager Garry Monk revealed afterwards that Jansson was dropped as he felt Cooper was a better choice on the day to partner Kyle Bartley in the centre of defence.

Cooper proved his doubters wrong as a new-look back four kept second-placed Brighton at bay without Jansson and fellow mainstay Luke Ayling, who was unavailable due to suspension.

Supporters took to social media to praise not only Cooper for delivering the goods but also Monk for a brave decision that paid dividends.

I hope whatever Jansson has done it’s patched up quickly. Cooper did a job tonight but he’s no like-for-like replacement. #LUFC

I do feel a bit more relaxed when Pontus plays, but i thought Cooper was tremendous today. #lufc

@PhilHayYEP end of the day Cooper comes through a game from a top 2 side with a clean sheet, hope this helps his confidence #lufc

#lufc @LiamCooper__ What a performance and a great win. Hats off to Cooper you had a solid game and showed your passion at the end #mot

resting Janson and playing Cooper was very brave, once again Monk got it spot on. #inmonkwetrust #MOT #lufc

Jansson has forged an outstanding centre-back partnership with fellow loanee Bartley this season that has laid the foundations for the team’s promotion charge.

The pair have ousted Cooper, who was a regular in the starting XI last season under former manager Steve Evans.

However, the defender, 25, was handed just his 13th start of this campaign against Brighton, with only seven of those coming in the Championship.

Leeds’ win over Brighton kept alive their hopes of automatic promotion, although they remain eight points adrift of the second-placed side with eight matches of the campaign remaining.