Leeds fans have reacted on Twitter after Garry Monk decided to axe midfielder Ronaldo Vieira against Newcastle on Friday night.

Captain Liam Bridcutt’s return from an achilles injury has seen Vieira drop out of the starting eleven, but 21-year-old Kalvin Phillips has remained in the side to partner Bridcutt.

Leeds announced the side on their official Twitter account, as Monk makes just one change to the side that strolled past Preston 3-0 at Elland Road last time out.

📋 Your Starting XI for tonight's game against @NUFC pic.twitter.com/OplKBluI0n

Monk will be hoping that the win against Preston generates some momentum ahead of Friday’s evening clash, with Newcastle coming into the game after losing 2-1 to Sheffield Wednesday.

Leeds fans have questioned the decision by former Swansea boss Monk to drop Vieira instead of Phillips, as Bridcutt comes back into the starting eleven.

should have kept Vieira and dropped Phillips. Other than that, solid line up #ALAW

WHY HAS VIEIRA BEEN DROPPED

Would have started with viera. Bridcutt will need a big game.

Taking either Vieira or Phillips out was always going to be harsh after Saturday but Bridcutt is a different league! #lufc

Leeds will be desperate to secure three points after play-off rivals Huddersfield, Fulham and Sheffield Wednesday all gained victory earlier on Good Friday.

A 23rd Championship league win of the season would help Monk’s side consolidate their position in the top six, with only five league games left to play.

In other Leeds news, these are the three Toon players the Whites must exploit if they are to secure a 23rd league win of the season. 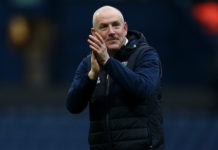