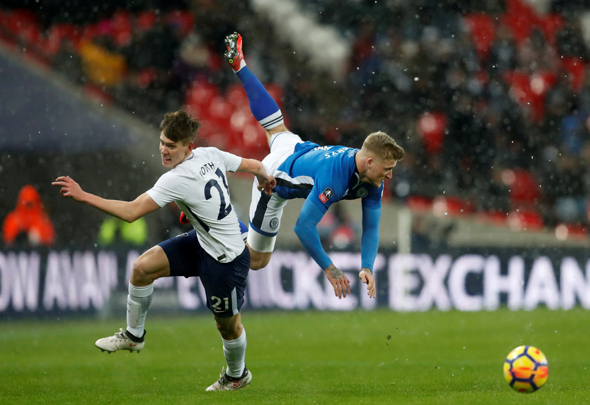 Tottenham centre-back Juan Foyth has said that he has not been told anything about a potential move to Leeds this summer.

Talking to FOX Sports Argentina, the 20-year-old centre-back, who joined for £12million from Estdiantes last summer, added that he thought the new Leeds manager Marcelo Beilsa is a “great coach”.

He also said that he was happy at Tottenham and that he’d been told by Mauricio Pochettino that he was improving but would need to work to get more minutes with Spurs.

The interview was posted on the FOX Sports Argentina Twitter page.

This is interesting. Juan Foyth would be a brilliant loan signing for Leeds and it seems to fit the narrative that’s being spun at the moment. Foyth is improving under Pochettino but it seems that he’s still not quite ready for a regular first-team place. Where better to develop further than by working with Bielsa in a rough, tough league? Leeds need a centre-back and Foyth would absolutely boss it in the Championship. He might not have bags of experience but he’s looked good for Leeds when he’s come on for them – last season he made eight appearances. The Pochettino/Bielsa links (Pochettino has said that Bielsa is his “football father”) mean this one could have legs but it will all depend on Tottenham and whether they get enough cover for him to leave. With the Toby Alderweireld situation dragging on, this one could go down to the wire, but he’s a player who is worth waiting for.