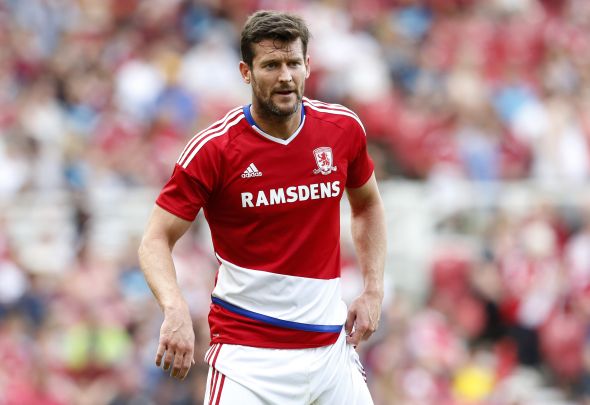 Leeds and Fulham are both interested in signing David Nugent, according to a report.

West London Sport claim that Middlesbrough striker Nugent is surplus to requirements at the Premier League club after they completed the signing of Rudy Gestede from Aston Villa.

The report details that Leeds are interested in signing the 31-year-old, but face competition from Championship rivals Fulham.

It is understood that the Middlesbrough striker will be available for either permanent or a loan move this January.

Middlesborough announced they made the £6million signing of Gestede on Wednesday and are now packed with strikers in their squad, as cited by the club’s official Twitter account.

Nugget has made just five appearances across all competitions this season and is now expected to be pushed even further down the pecking order.

The club are trying to retain their Premier League status and manager Aitor Karanka has not used Nugent since September.

The striker could join a Leeds side who are flying high in the Championship table in fifth, while rivals Fulham are currently just outside the play-off places in 10th.

Leeds should make Nugent a January priority and has experience of the Championship would be valuable. The Whites do have Chris Wood and Souleymane Doukara as their main attackers, but could do with an extra player in case of injuries. Nugget is a proven goalscorer in the Championship and still has a lot to offer at the age of 31. He played a crucial role in Middlesbrough’s promotion to the Premier League last season, scoring eight goals and supplying eight assists in 40 appearances. Nugent also experienced promotion to the top-flight with Leicester and would bring some valuable knowledge to Garry Monk’s squad.

In other Leeds transfer news, the club are in a battle to sign a proven Premier League midfielder who is desperate for a move.