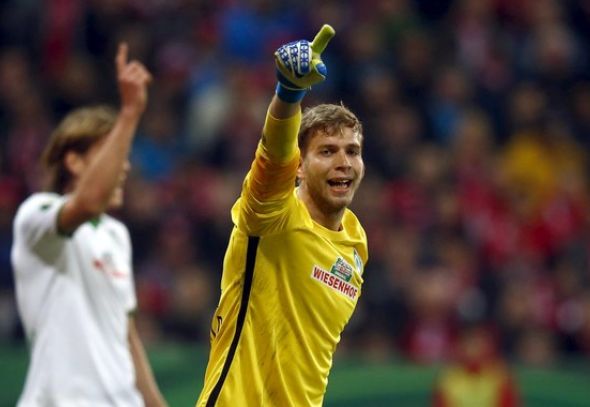 Leeds United have entered the race to sign Werder Bremen goalkeeper Felix Wiedwald, according to a report.

German sports website Spox claim that there are as many as six Championship clubs currently interested in signing the 27-year-old this summer, who has just one year left to run on his contract in Germany.

However, Wiedwald has asked to leave Werder Bremen this summer, despite playing regularly for the club in the Bundesliga last term.

He made 26 appearances in all competitions during the 2016-17 campaign, keeping five clean sheets, and Leeds United manager Thomas Christiansen is reportedly interested in bringing him to Elland Road.

But he will face stiff competition from a number of their Championship rivals, with Nottingham Forest, Norwich City, Queens Park Rangers, Wolverhampton Wanderers and Fulham also understood to be keen.

There is also interested in the stopper’s services from further abroad, with French outfit Nantes completing the roster.

Werder Bremen are currently seeking a replacement for Wiedwald, suggesting that they are happy to meet his request and allow him to leave the club this summer.

Wiedwald moved to the club from German rivals Eintracht Frankfurt in 2015, having earlier begun his career at Weserstadion.

Leeds were very fortunate last season to have a reliable match-winner in between the sticks at Elland Road last season in Rob Green, but the reported interest in Wiedwald suggests manager Thomas Christiansen could be set to make a change in the department. Wiedwald enjoyed regular first-team football at Werder Bremen last term, and he will command similar assurances if he were to join Leeds for the new season. There is not stand-out alternative to Green currently at the club, with Marco Silvestri and Bailey Peacock-Farrell the two deputy stoppers, but Wiedwald would provide much higher quality competition.

In other Leeds United transfer news, the Whites are reportedly in a two-horse race to sign this £2million-rated international defender.