Noel Whelan has branded George Baldock and the officials in charge of Leeds United against Sheffield United on Saturday as “disgusting.”

Speaking exclusively to Football Insider, the ex-Leeds forward was furious that Baldock‘s “scissor” tackle on Tyler Roberts went unpunished by referee Graham Scott as the Whites triumphed 2-1 at Elland Road.

Leeds were 1-0 up in the first half when Blades defender Baldock lunged at Roberts, sending the 22-year-old flying. 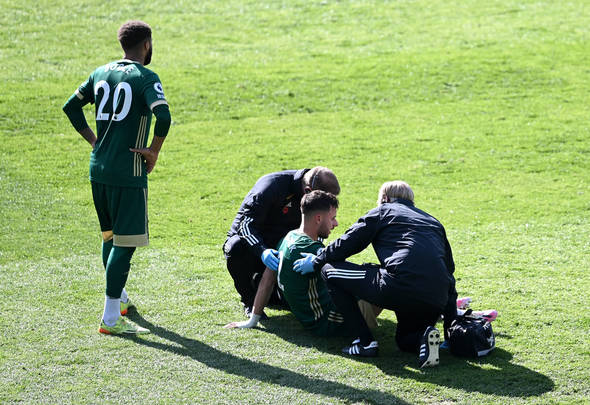 Baldock himself sustained a head injury as a result of the tackle and was later forced to withdraw.

Roberts meanwhile played on until he was replaced by Mateusz Klich with 10 minutes of the match remaining.

Whelan savaged on-pitch officials for their oversight and the VAR team for failing to punish the “leg-breaking challenge.”

He told Football Insider correspondent Dylan Childs: “It was a bad decision from the referee and even worse from VAR. Shocking, disgraceful, disgusting.

“That is a straight red without any shadow of a doubt. It was a scissor above the ankle. To not even review it was disgraceful.

“It’s not even like it was subtle. It was in your face, he landed on his neck. How did they not go back to look at that? Shocking. It was a leg-breaking challenge and he got away with it.”

Leeds’ victory against their Yorkshire rivals brought them level with 10th-place Arsenal with eight games remaining.

Sheffield United meanwhile are languishing at the foot of the table having collected just 14 points all season.