Leeds responded to striker Chris Wood quitting the club in the best possible way on Saturday evening, recording a 2-0 victory away at just relegated Sunderland.

Wood was left out of the squad amid heavy interest from Premier League club Burnley, and the striker released the following statement.

“Due to strong interest from a Premier League team, the ongoing discussions with the club, and given it has always been my ambition to play at the highest level, I don’t feel it is right that I play today.”

Wood scored 30 goals in all competitions for Leeds last season and that seems to have earned him a move to the Premier League.

Leeds fans would have been fearing the worst in a tough Championship game against Sunderland, but will have been delighted with the 2-0 win – and the manner of the performance.

It shows that there’s life after Wood and that’s the first of our three talking points from the game.

1. Goodbye Wood and thanks for the goals

Chris Wood almost single-handedly fired Leeds into the play-offs last season. His 30 goals in all competitions is exactly what Leeds fans would want from their striker, but unfortunately it put him in the shop window. After losing Andre Gray to Watford, Burnley were in the market for a striker and once they’d identified Wood the move was inevitable. Wood has said he wants a shot at the Premier League and he deserves it. The manner of his departure leaves a sour taste in the mouth and it’s indicative of the modern game, but Leeds fans can take the high ground. The performance from the 11 players on the pitch on Saturday against Sunderland was brilliant. A 2-0 win away at Sunderland would have been good at any point in the season, but after what happened on Saturday, it was incredible. Sharp and decisive, there was nothing lucky about the win. It was a fully deserved three points. Now, manager Thomas Christiansen must move fast to re-invest the money he gets from Burnley for Wood. There’s not long left before the transfer window slams shut and this is a decision he needs to get right – Leeds’ promotion hopes are resting on it. 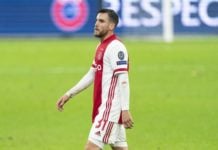