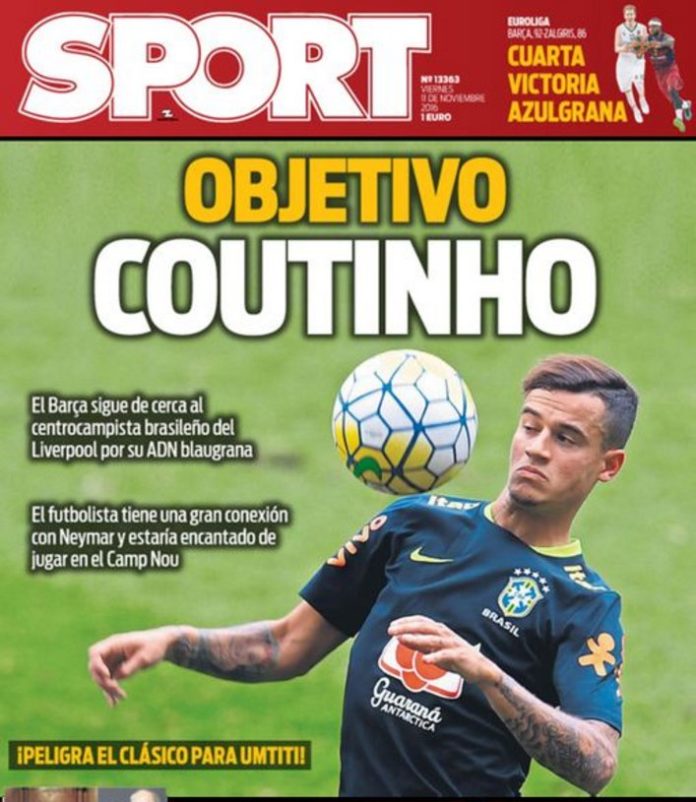 Philippe Coutinho visited the Barcelona team hotel before their Champions League clash against Manchester City last week, according to a report.

The Times claim the Liverpool playmaker was at the hotel to meet his close friend and former teammate Luis Suarez ahead of the match at Etihad Stadium, which City won 3-1.

This comes amid speculation that Barcelona will target Coutinho next summer despite the considerable presence of Suarez, Lionel Messi and Neymar at the Nou Camp.

The front page of Catalan paper SPORT on Friday carried the headline ‘Objetivo Coutinho’ and suggested that the Liverpool ace, 24, was Barcelona’s No 1 summer target.

Spanish newspaper Sport splashed an image of the Brazilian on their front page and claimed the Spanish giants are preparing a whopping £65million bid in an attempt to lure him to the club.

The report came immediately after Coutinho’s stunning performance for Brazil against Argentina on Thursday night when he scored a wonder goal in his side’s 3-0 triumph.

Coutinho celebrated the goal on Instagram after the game by posting an image of himself and Neymar.

It is believed his friendship with compatriot Neymar could be the key to luring him to the Nou Camp.

The Barcelona sensation also added to a public courtship in the aftermath of Brazil’s 3-0 win over Argentina on Thursday by claiming he and Coutinho are “made to play with each other”.

The Liverpool ace has been instrumental in his side’s ascent to the Premier League summit and has already scored five goals and notched up five assists in the competition this season.

In other Liverpool news, fans reacted on Twitter as Daniel Sturridge is set to start ahead of Tottenham’s Harry Kane during England clash against Scotland.