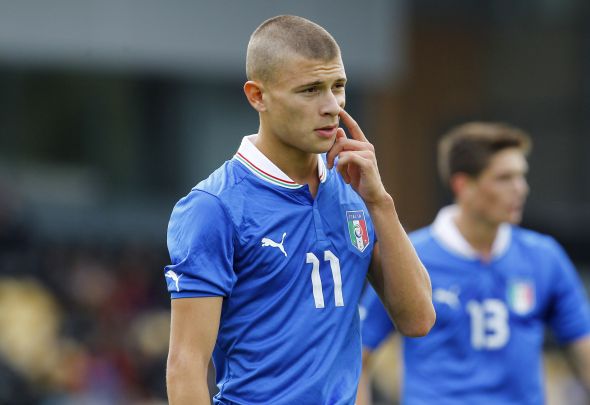 Liverpool are keeping tabs on Cagliari midfielder Nicolo Barella after sending scouts to watch him play against Fiorentina on Sunday, according to a report.

Italian publication La Nuova claim Jurgen Klopp sent his spies to watch the 20-year-old star during Cagliari’s 1-0 defeat, as he impressed despite being on the losing side.

It is believed that rivals Chelsea are also monitoring Cagliari’s wonderkid, while Italian giants Juventus, AC Milan, Inter Milan and Roma have also been credited with an interest.

A five-time Italy Under-20 international, Barella has starred during his 23 Serie A appearances this season as he helps Cagliari steer clear of relegation.

The midfielder has inspired his side to defy pre-season expectations of relegation to Serie B, as they sit 16 points clear of the bottom three in 15th place.

Known for his wonderful array of passing, Cagliari’s number 18 has a successful pass rate of 80.5 per cent as he continues to ply his trade in the middle of the park.

However, with a contract until the summer of 2021, it remains to be seen if any interested parties can tempt Cagliari boss Massimo Rastelli to cash in on his midfield superstar.

There is no doubt that Barella is one of Serie A’s next big talents and bringing him to Merseyside would be a huge coup for Klopp’s Liverpool if they can beat the likes of Chelsea, Juventus and Roma to his signature. However, the arrival of Barella could spark the end of Emre Can’s Anfield stay, as he continues to mull over a new contract. The former Bayer Leverkusen midfielder has been in talks for some time now with nothing materialising, with just over a year left on his current deal. The signing of Barella then could force Can down the pecking order under Klopp despite his winning goal against Burnley on Sunday.

In other Liverpool transfer news, West Ham have been installed as favourites to sign this Reds attacker.