Liverpool’s lead Academy fitness coach Jordan Milsom has been reported to be part of Steven Gerrard’s incoming backroom staff at Ibrox on June 1st – and he appears to have dropped a massive hint on Twitter that he could be on his way to Ibrox with a Twitter post to an advert for what appears to be his current job.

Milsom was named as one of two Liverpool coaches who, according to the Independent, would make their way north with Gerrard – as well as former Scotland captain Gary McAllister – when the Anfield icon takes his first job in management next month.

After posting a link to an advert for the fitness coach job with the Premier League giants on his personal Twitter account, it would seem that Milsom is headed for Glasgow as Gerrard’s staff starts to take shape.

Milsom joined the Reds in 2010 and had been part of the first-team staff at Anfield before switching to the club’s Under-18’s when Gerrard took over as head coach of the Academy side so there is obviously a strong relationship between the two and it would make sense that he would follow Gerrard to Ibrox – or wherever he had taken his first managerial role.

After the sacking of Pedro Caixinha, the Gers have heavily relied on the club’s Academy staff to step up and fill the roles left in October with only Jimmy Nicholl and Jonatan Johansson part of the first-team coaching staff.

Since Nicholl has now left and question marks remain over what role – if any – Johansson will have in Gerrard’s staff, the likes of Milsom and McAllister are quality appointments that should help the Gers squad continue to close the gap to bitter rivals Celtic at the top of the Scottish Premiership. 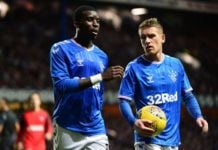