Birmingham City striker Isaac Vassell has been ruled out of Tuesday night’s clash against Leeds United at Elland Road.

Manager Harry Redknapp confirmed the 24-year-old, who joined the Midlands club from Luton this summer, will play no part against the high-flying Yorkshire side.

Vassell has not played since damaging his hamstring against Bournemouth on 22 August but the trip to West Yorkshire could be the last matches he misses.

“Saturday he should be available to be on the bench and play a part in the game,” Redknapp said, as quoted by the Birmingham Mail.

“They (the phsios) thought this morning that starting him might just be stretching him a little bit too much.

“He’s had a hamstring. He’s never had one before. You don’t want to just throw him in and he goes and tears it and he’s out for eight weeks or something.

“You’ve just got to go steady with him.”

The loss of Vassell is a major blow as he is regarded as a forward of great promise after scoring 16 goals in 55 matches for Luton.

Che Adams could come into contention for a start after coming off the bench at Norwich on Saturday following his own hamstring strain.

Leeds are waiting on whether they can include new striker signing Pierre-Michel Lasogga in their starting line-up.

The deadline day arrival, who scored two goals on his debut in United’s 5-0 hammering of Burton on Saturday, is waiting for his wife to give birth to their first child.

Lasogga’s partner was due to go into labour at the weekend but has not yet done so and, 24 hours before kick-off, the player is free to make his second appearance for his new club.

In other Leeds United team news, a top-flight striker with an excellent goals record has revealed he wants to permanently move to Elland Road next year. 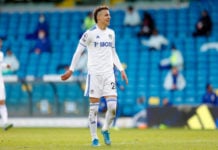