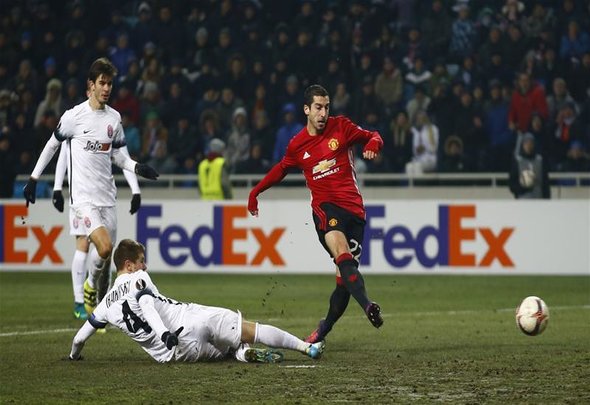 Manchester United will be forced into making at least one change to their side to face Crystal Palace on Wednesday night.

In-form winger Henrikh Mkhitaryan, who scored the all-important winner against Tottenham on Sunday in their 1-0 win at Old Trafford, is set to miss out through an ankle injury.

The 27-year-old star was substituted in the second half after a robust tackle with Spurs left-back Danny Rose, which will now see him miss United’s next two games before his likely return on Boxing Day.

Without the Armenia international in the side, manager Jose Mourinho is likely to pick Marcus Rashford after the teenage forward appeared from the bench against Spurs.

Despite playing out of position, Rashford’s quick turn of pace and ability to reach the byline before supplying a cross could be the difference against Alan Pardew’s Eagles.

Undisputed number one David de Gea will continue in between the sticks, as Sergio Romero watches on. Similarly, Antonio Valencia will remain at right-back.

Despite the £30million signing of Eric Bailly, Marcos Rojo and Phil Jones’ strong partnership at centre-back continues to go from strength to strength after Sunday’s clean sheet.

Luke Shaw continues to recover from an injury picked up against West Ham in the EFL Cup, so Matteo Darmian deputises on the left side of defence.

Wearing the captain’s armband, Michael Carrick has been the foundation of his side’s return to form and he partners Ander Herrera in centre-midfield.

That gives license to Paul Pogba to bomb on from the number 10 position, with Wayne Rooney still struggling to work his way into Mourinho’s starting XI.

Rashford comes in on the right, while France international Anthony Martial will continue his fine form on the left.

Eight goals in 14 Premier League encounters has seen veteran Zlatan Ibrahmiovic begin life at Old Trafford in marvellous form, and he will lead the attack against Palace.

Three points for United could see them continue to claw in Spurs, who sit three points above them in fifth place.

In other Man United news, Ibrahimovic said this to Pogba at half-time against Spurs.