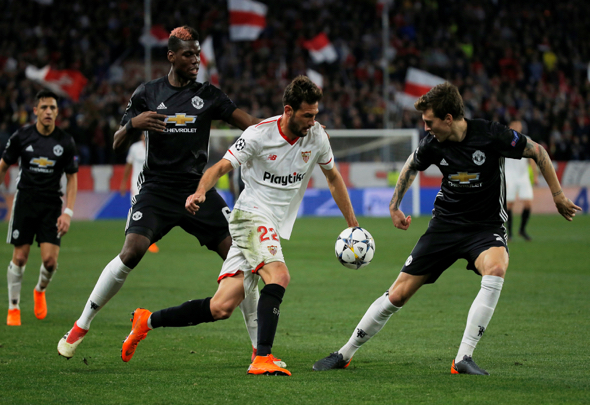 Man United fans aren’t happy after another toothless – and goalless– display from Man United in the Champions League away at Sevilla.
Fans didn’t like the line-up, when Jose Mourinho decided to leave star man Paul Pogba on the bench, and they weren’t happy with the person Mourinho decided to start, Scott McTominay.
In the end Pogba was introduced earlier than Mourinho would have wanted, after an injury to Ander Herrera in the 16th minute.
And when he came on it was a case of be careful what you wish for as he put in a very poor display in Spain.
McTominay, by contrast, was probably the best United player on the pitch.
But not even he could inspire United to a goal in a game they would have lost but for another world-class save from David de Gea.
United had come to do a job, one that Mourinho is now famous for, but fans bemoaned the lack of cut-and-thrust from their side and their lack of quality and tactical nouse.
And Pogba took the brunt of their criticism – here are the best reactions to his display in Spain:

For all the fans moaning about why pogba didn’t start and mctominay did, we now know why, pogba has been awful where as mctominay has been excellent #mufc

Pogba has been a disgrace tonight. As for Mourinho, I’ve had enough of him, personally. Sick and tired of being bored to sleep by United’s performances. I’m already looking forward to the day he leaves the club. There, I said it.

I am a staunch Pogba defender but these are the games where he hasn't performed. Important games that he was bought for, to perform in and he's a constant disappointment

Pogba has been embarrassing tonight. Doesn't looked bothered. He'd rather be at home doing the cha-cha slide with his brother

Pogba has been terrible, The kind of performance that'd make everyone think that the fallout rumours with Jose is actually true indeed. #MUFC

Absolute tears when Pogba has the worst game in history

Pogba has been shocking since coming on;hasn't impacted the game

I can see why Mourinho doesn’t play Pogba lately. Shocking