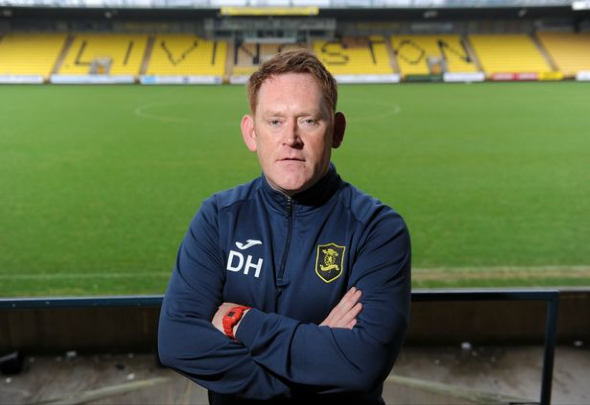 Livingston manager David Hopkin has revealed goals like the one he scored on Saturday is the reason the Lions signed Rangers forward Ryan Hardie on loan until the end of the season.
Hardie joined team-mate Jordan Thompson in penning a loan deal with the West Lothian side as they both enter the final months of their Ibrox contracts.
The Gers striker looks to have fallen out of the reckoning at Ibrox and will be hoping his spell at the Tony Macaroni Arena will help him win an extended deal at Ibrox or secure him a move elsewhere.
Former Leeds and Scotland midfielder Hopkin admitted Livi “fought hard” to get Hardie and was delighted to see their hard work pay off with a goal in the 2-0 win over Dumbarton.
“It was great for Ryan to come in and get a goal,” Hopkin said, as quoted by the Evening Times.
“That’s why we brought him to the club. We fought hard to get him.
“He runs channels and he’s always got a chance of scoring. There were six or seven clubs that wanted him. You could see why on Saturday.”
Hardie has made 17 appearances, scoring twice, for the Gers since making his debut under Ally McCoist.
The 20-year-old has enjoyed loan spells with St. Mirren and Raith Rovers but has struggled to force his way to a regular place in the first-team at Ibrox and could now be on his way out the door in the summer.
Hardie is a regular in the Scotland Under-21 squad but faces competition at Ibrox for places from the likes of Jason Cummings, Alfredo Morelos, Eduardo Herrera and youngster Zak Rudden.
In other Rangers news, some Rangers fans have taken to Twitter to praise one player for his performance in the win over Ross County.
We’ve launched a << BREAKING NEWS FEED>> exclusively for your club. ‘Like Us’ on Facebook by clicking here if you want 24/7 updates on all Rangers breaking news.