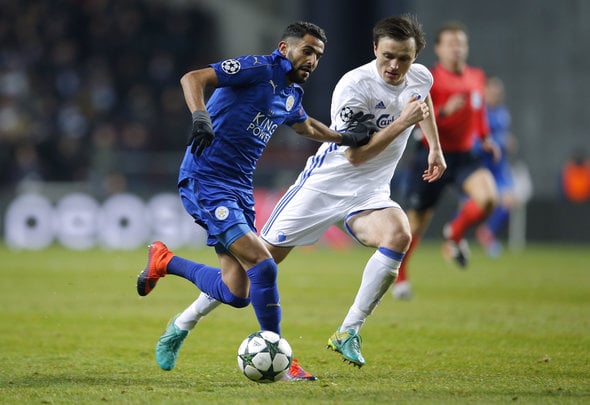 Martin Jol has claimed that Tottenham will be superbly placed to take the next step and win silverware if they sign a dazzling winger this summer.

The former Spurs manager named Leicester playmaker Riyad Mahrez as the man who could catapult the team to trophies.

Tottenham brushed aside Manchester United to secure a 2-1 win on Sunday with another masterful display that ensured they will end the season in second place in the division and with their highest points tally of the Premier League era.

Jol is a big fan of Mauricio Pochettino and the team he has assembled at White Hart Lane after transforming the club’s fortunes during his three years at the helm but identified one area for improvement.

“I was talking to one of Spurs’ double winners Cliff Jones,” Jol told Football London. “I said the only player they lack now is someone like him, a winger. If they put in one player like [Eden] Hazard or Mahrez then wow and Cliff said he agreed.

“Tottenham have always played with wingers but this is the first time I’ve seen a Spurs side playing without them but still playing in the Spurs way. Push and run. Lots of crosses and shots at goal. They play to the strength of the players and that comes from the coach.”

The Telegraph reported last week that Spurs have joined the race to sign 2016 PFA player of the year Mahrez this summer after making an enquiry for him in the January window.

The Premier League champions value the Algeria international, who joined from Le Havre in January 2014 for £650,000, at over £30million as a result of his matchwinning exploits over the last two seasons.

There has been speculation that Leicester are willing to grant Mahrez an exit in the coming window after a promise made to that effect last summer.

Mahrez has not been as influential for Leicester this season as he was in 2015-16, when he scored 17 league goals and provided 10 assists en route to their title triumph.

But he has still scored 10 goals and supplied seven assists in 46 appearances in all competitions, with four of his goals coming in Europe’s premier club competition, the Champions League.