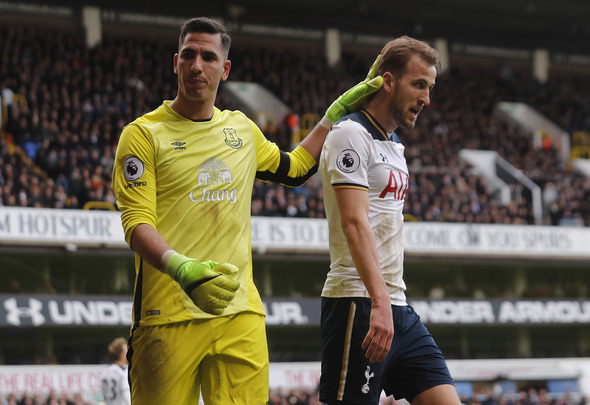 The Toffees earned a 3-1 win over Sean Dyche’s men at Goodison Park with strikes from Phil Jagielka and Romelu Lukaku alongside a Ben Mee own goal needed to cancel out a Sam Vokes penalty.

But, the performance was not a flawless one from the Merseyside team and 26-year-old Robles came in for particular criticism after conceding the penalty.

Now, Ball believes that the Spaniard is not learning from past mistakes and has claimed that the shot-stopper would not get into any of the top four sides, while also stating that a new goalkeeper is now a priority for the Blues this summer.

“It’s as if Joel Robles is not learning,” started Ball in his column for the Liverpool Echo.

“Ever since the Spaniard came back into the Everton side on a regular basis around the turn of the year, he’s made some crucial saves at important times.

“For the most part, Robles has been quite steady.

“But what you cannot deny is that he continues to make silly mistakes: and none sillier than against Burnley on Saturday when he conceded a penalty.

“In the end, it didn’t matter as Everton won 3-1 but next season, or in games against sides better than the Clarets, it will cost us.

“For a side chasing the top four, that cannot happen.

“And so signing a new goalkeeper in the summer is a priority and knowing the Dutch football mentality as I do, I know Koeman and his staff will be making blunt assessments on the current squad.

“They will be asking: how many of this squad would get into any of the sides currently in the top four?

Robles joined Everton in the summer of 2013 as he rejoined former boss Roberto Martinez in Merseyside.

He has since made 61 appearances for the club, conceding 70 goals and keeping 23 clean sheets.

The Spaniard had lost his position between the sticks to summer signing Maarten Stekelenburg earlier in the campaign, but he reclaimed the position and has since featured in 18 Premier League encounters, keeping nine clean sheets and conceding 17.

In other Everton news, Frank Lampard believes this is where Ross Barkley should play next season.