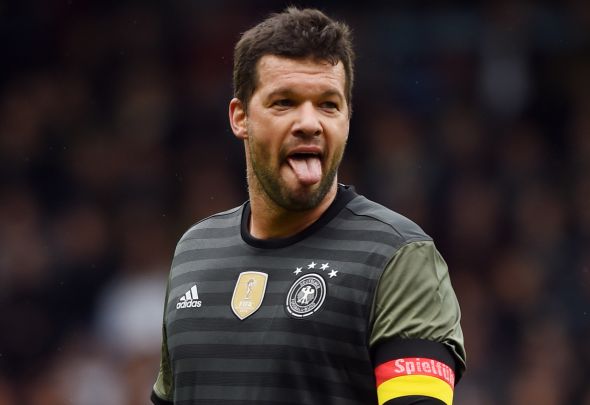 Michael Ballack has surprised no one by predicting Arsenal to be knocked out of the Champions League on Tuesday night.

Former Chelsea midfielder Ballack believes another of his old sides Bayern Munich will progress to the quarter finals of the European competition, after their 5-1 first-leg triumph.

Posting on his personal Twitter account, former midfielder Ballack believes the two sides will draw 2-2 at the Emirates Stadium, finishing 7-3 on aggregate to the German champions.

Arsene Wenger’s side come into the match off the back of a poor run of form in recent matches, which has seen them lose four of their last six outings.

The Gunners will also be without playmaker Mesut Ozil as they look to do the impossible and claw back their first-leg disadvantage, as the 28-year-old misses out through illness.

Bayern, on the other hand, have won 14 of their last 16 league and cup fixtures, while drawing against Hertha Berlin and Schalke in the Bundesliga.

Carlo Ancelotti will be hoping his side can build on their form against the Gunners, after beating the north London giants three times in their last five meetings.

Arsenal must win 4-0 or by five goals if they are to defy the odds and progress to the last eight of the Champions League, after failing to do so since 2009-10.

In other Arsenal news, Sol Campbell has also predicted Tuesday night’s clash between his and Ballack’s former sides.