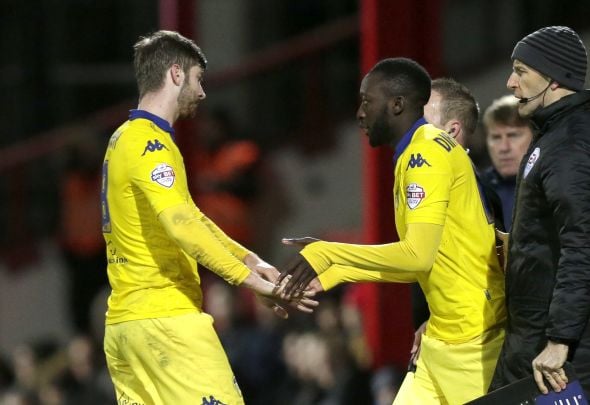 Leeds appear to have dropped a selection hint for Tuesday night’s Championship clash against Reading.

Midfield duo Toumani Diagouraga and Luke Murphy were left out of Leeds Under-23’s side on Tuesday, despite featuring regularly for Jason Blunt’s outfit this season.

Leeds posted the teamsheet on their official Twitter account, with Murphy and Diagouraga not involved in the side to face Sheffield Wednesday.

First-team boss Garry Monk could look to bring both players into his senior squad, as he is without central midfielders Kalvin Phillips and Eunan O’Kane, while Liam Bridcutt is still a doubt despite returning to training.

Former Brentford powerhouse Diagouraga has featured regularly for the development side this season, appearing six appearances for Jason Blunt’s Under-23’s side after making one senior appearance against QPR.

Of those six, the former Paris Saint-Germain youth player has captained the Yorkshire giants’ reserve side four times.

Along with Diagouraga, Murphy has also been ostracised by Monk since his arrival at Elland Road. Murphy has made just one senior appearance this season against Luton Town in the EFL Cup.

Murphy, who has captained the reserve side in all four of his appearances, has also been excluded from the rival clash against Wednesday.

It could mean that Monk makes a major U-turn and names the pair in his 18-man squad on Tuesday evening against Jaap Stam’s Reading, despite them being expected to leave Yorkshire in the upcoming January transfer window.

Ireland international O’Kane has been ruled out with his ongoing groin problem, while Phillips is suspended for his hand ball against Brighton.

Captain Bridcutt has failed to feature for Leeds in three months, after breaking his foot against Blackburn in the EFL Cup but could be set to return after training this week.

In other Leeds team news, these three players could play a crucial part against Reading.