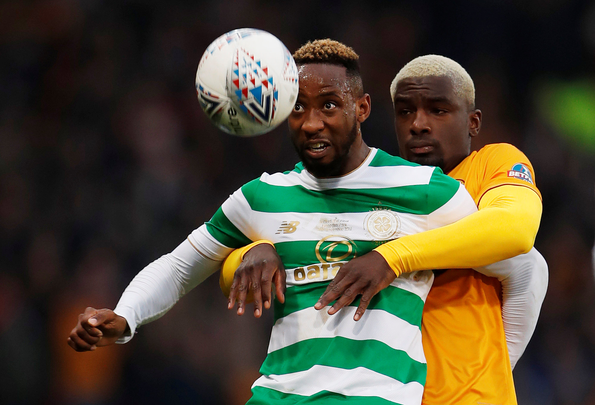 Motherwell defender Cedric Kipre has claimed he didn’t do anything wrong in the incident which saw him sent-off during the Steelmen’s clash with Celtic, after an incident with Scott Brown.

“I wanted to stand up and then he pushed me away, so my first reaction was to brush him away with my foot,” he said.

“I don’t think I did a bad thing, I just wanted to stand up and keep playing.”

"When I got the red card I thought: 'I've let everyone down.' Next time I won't react."

Cédric Kipré speaks about his sending off against Celtic. pic.twitter.com/SK6adPW3sK

The player is completely wrong about the incident.

It’s all very well Kipre saying that he didn’t think he did anything wrong, but he still shouldn’t have given the referee a chance to send him off in the first place by ‘brushing’ Brown away.

The player doesn’t seem to have learned his lesson from his sending-off in the Betfred Cup Final against the Hoops in November, when he was sucked into a challenge by Scott Sinclair and was red carded.

Whilst there might have been some doubts about that red card, there shouldn’t be any for the one he received at Fir Park.

Motherwell have appealed the decision against the red card, but it shouldn’t be rescinded as you can’t aim a kick at an opposition player and get away with it, which is what will happen if Kipre’s challenge is downgraded to a yellow card, for example.

Referees are often rightfully criticised in Scotland but Craig Thomson got the decision to send-off Kipre 100% correct.

In other Celtic news, the Hoops have been linked with Real Zaragoza centre-forward Borja Iglesias