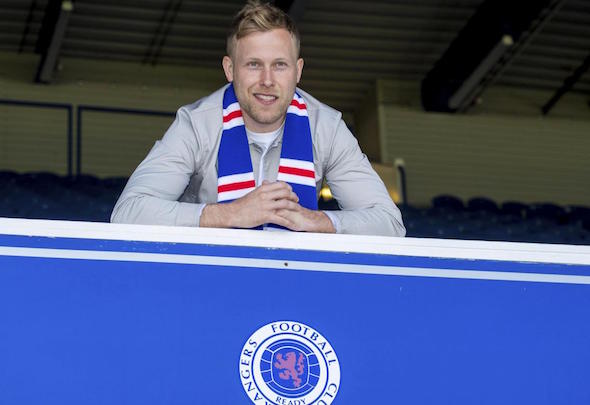 New Rangers midfielder Scott Arfield has revealed that he hopes to continue wearing the number 37 shirt he wore at Burnley as a tribute to tragic former Falkirk team-mate Craig Gowans.

Gowans was killed aged 17 in an accident at Falkirk’s old Little Kerse training ground just as the Bairns youngsters were breaking into the first-team – and Arfield later adopted Gowans’ squad number as a tribute.

After becoming the first signing of the Steven Gerrard revolution at Ibrox, Arfield revealed that he had spoke with Gowans’ family about continuing to wear 37 for Rangers – and admitted will be “buzzing” to continue.

“I hope so. I spoke to Craig’s family, his siblings and his mum and dad. They were ecstatic that I still want to take that on,” Arfield said, as quoted by The Herald.

“It is something that means a lot to me and my family. If it gets rubber-stamped, I will be buzzing to wear it.

“I feel as if when I wear it there is a sentimental factor that kind of gives you a peace of mind. You feel as if your mate is looking down and you are carrying on things not just for you, but also Craig’s legacy as well as his family. Squad numbers mean a lot to certain players and some don’t to others. Certainly, that one means a lot to me.

“It was Craig’s squad number when we came through and broke into the first team. I was 31 and he was 37. At the time, that got retired by Falkirk. I couldn’t do it at Huddersfield but when I went to Burnley, I thought: ‘This is the time’.”

Having been around Falkirk FC both before and after Gowans’ tragic death, it is something that is still strongly felt within the club and the players that played alongside him. A group of his former team-mates, including Arfield and Dundee United’s Tam Scobbie, have regularly spoken about their tragic former team-mate – as well as another who was killed a few years later – and have worked to keep their friend’s memory alive within the game and beyond. In an era when players numbers are often more about branding than anything else, the tribute is a lovely gesture from a player who is always spoken about in glowing terms by his peers and conducts himself impeccably publicly. With number 37 currently allocated to fifth-choice goalkeeper Kieran Wright, there shouldn’t be any issues with the 29-year-old wearing it next season for the first-team as Steven Gerrard’s reign as manager gets underway. A fantastic gesture by Arfield.