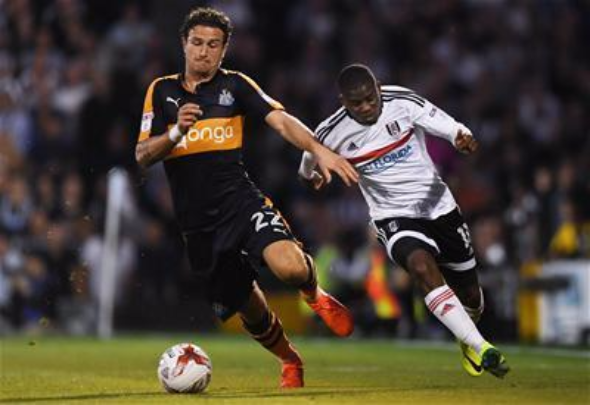 Daryl Janmaat is on the verge of a swift return to the Premier League with Watford after passing a medical – and Newcastle fans took to Twitter to welcome his departure.

The 27-year-old Netherlands international was the subject of a £7.5million bid from the Hornets on Tuesday evening, a profit of around £2.5million for the Magpies.

The defender was left out of Rafael Benitez’s squad for the Championship clash against Bristol City on the weekend in a signal that a move was imminent.

Tottenham’s DeAndre Yedlin has been lined up as a possible replacement to Janmaat at St James’ Park, while new signing Jesus Gomez slotted in to the team for the EFL Cup win over Cheltenham on Tuesday.

Fans took to social media complimenting Janmaat for his attacking play, but calling him a liability when he was asked to defend and hinted that he won’t be too missed.

Janmaat never shirked a tackle & always gave 110, when others weren't arsed. But he is a defensive liability, not great for a RB. #Bye #nufc

Janmaat joining Watford is the same as Townsend going to Palace, absolutely no ambition from the two of them. #NUFC

How is Yedlin a big downgrade to Janmaat? Both of them can't defend, both of them can get foward. Yedlin is younger and is quicker #NUFC

Physically, Yedlin has that blistering pace that Janmaat doesn't possess. Won't be caught out as much defensively on the counter. #NUFC

The Holland international moved to St James’ Park in 2014 for a fee around £5million from Feyenoord.

The experienced defender made 77 appearances for the Magpies in his two-year stay at the club.

He has also played in 27 matches for his country and will be keen to return the Netherlands to past glories after missing out on Euro 2016 this summer.

In other Newcastle transfer news, the Magpies have reached an agreement to loan Tim Krul to Ajax for the season.