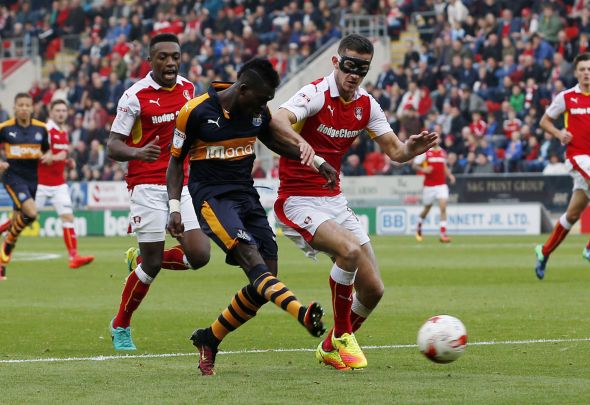 Christian Atsu started on the wing for Newcastle against Cardiff on Saturday, getting on the score sheet in the process – and fans on Twitter were delighted with what they saw from him.

The 24-year-old pacey attacker replaced Matt Ritchie in the line-up at St James’ Park, with the Scotland international suspended from the clash.

Atsu took his chance well and opened the scoring within the first five minutes as Newcastle ran out 2-1 winners with Yoan Gouffran also bagging to cancel out a Peter Whittingham goal.

Fans were left hailing the on-loan man’s display on social media with many claiming the club need to make it a permanent one in the summer.

First bit of summer business Rafa needs to do is sign Atsu on a permanent deal!#NUFC

We need to buy Atsu at the end of the season. He's easily premier league quality. #NUFC ⚫️⚪️

Atsu is starting to look like a bit of an inspired loan signing! He certainly remains a rough diamond, but there's a player in there. #NUFC

Atsu made the switch to the north east from Chelsea, joining on an initial loan deal.

He has made 11 appearances for Rafa Benitez’ high flyers with a return of two goals.

His performance on Saturday has helped Newcastle to maintain their dominance over the rest of the Championship.

The Toon are now sat six points clear at the top of the league with Brighton their nearest competitors, who play in the evening kick off against Bristol City.

They will travel to face fellow Championship giants Leeds after the international break in what is set to be an enthralling encounter with Elland Road sold out.

In other Newcastle news, Lascelles congratulated this senior man on Twitter after award win.