Newcastle have made a sensational £25million approach for Dinamo Zagreb youngsters Ante Coric and Filip Benkovic, according to a report.

Croatian newspaper Sportske claim that the Magpies have offered a staggering combined fee for the highly-rated 19-year-old duo.

However, Dinamo Zagreb are understood to have rejected the approach.

The pair have established themselves as first-team regulars at the reigning Croatian champions, and have been lined-up as future European stars.

The Daily Mail claimed in its live transfer blog on Monday (17:33) that Ante Coric could be available for £10million, and was a previous target for Premier League giants Manchester City.

Coric has been a mainstay in the Dinamo midfield this season, contributing five goals and four assists from 27 appearances in all competitions.

The 19-year-old appeared in four of Dinamo’s six Champions League group-stage games, but could do little as the Croatian side were eliminated without a win.

He has also established a footing on the international stage, and was named in Croatia’s squad for the European Championships in the summer, but did not add to his previous two appearances.

It is said that Coric is not keen on a drop to the Championship.

The Daily Express, meanwhile, claim that Benkovic alone would cost around £25 million.

The defender stands at a towering 6ft 4″, and has made 28 appearances for Dinamo this season – ten in the Champions League.

Unlike Coric, he has yet to break into the Croatia senior setup, but having featured regularly for the youth sides, it is surely only a matter of time before he works his way into Ante Cacic’s plans.

Newcastle’s £25 million splurge looks an exciting, yet highly ambitious prospect. Both players are only recently established on the European scene, but they are both held in high regard across the continent. It would be a considerable coup if Rafa Benitez could land one or either player, not to mention a real statement of intent. He would though, do very well to convince the players that a move to the Championship would be worthwhile, even if the Magpies spend just six more months in the second-tier. The two players would be fantastic assets to the Magpies’ ranks, and Coric in particular, would certainly set the second-tier alight. Benitez wants to build a team capable of becoming a Premier League force again, and this would do just that. Players of this calibre will probably be summer targets though – if promotion is realised.

In other Newcastle transfer news, the Magpies have reportedly joined the race to land this £1million-rated Championship hitman. 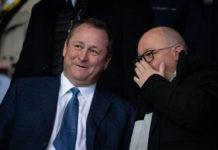