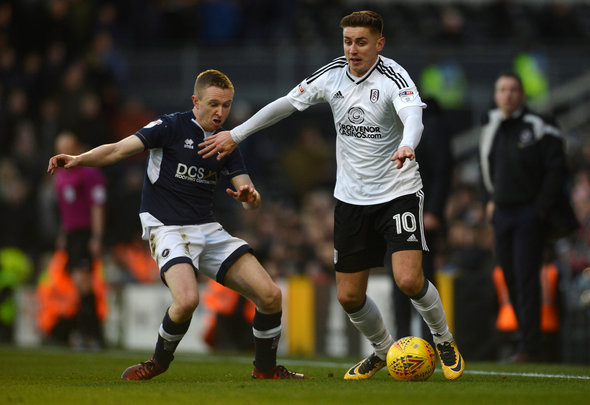 Newcastle United have been installed as second favourites to sign Fulham playmaker Tom Cairney during the Janaury transfer window, according to the latest bookmakers’ odds.
SkyBet have priced the Magpies at 5/1 to sign up Cairney, 26, before the end of the month but West Brom have been installed as 6/4 favourites after it was reported they had tabled a £15million bid for the one-time Scotland international.
Burnley (20/1) have also been priced in the running to sign Cairney, but they appear to be outsiders with Tyneside or the Black Country being the midfielder’s most likely next destination.

Guardian deputy sport editor Ed Aarons claimed on his personal Twitter account on Monday night that West Brom had tabled a bid worth £15million for Cairney.
However that deal may impact Newcastle, as it is understood that the London club may use that money to swoop for St James’ Park striker Dwight Gayle.

West Brom bid £15m for Tom Cairney being considered by Fulham. They want Newcastle striker Dwight Gayle if he leaves

Cairney has been in hot form for Fulham over the past couple of seasons, however in the first half of this term, his game time has been limited due to knee injuries.
The pass master has still been able to help the Cottagers stay in the top-half of the Championship though as they look to press on and secure a spot in the play offs.
The former Hull midfielder, known for his brilliant playmaking abilities, has made 17 appearances in all competitions this term, scoring one goal and supplying one assist.
Last season, Cairney was in much better form with 13 goals and 12 assists in 51 total outings.
In other Newcastle United news, Rafa Benitez is looking to force Mike Ashley’s hand and is plotting a deal worth over £100,000-a-week for this proven Premier League performer.
We’ve launched a << BREAKING NEWS FEED>> exclusively for your club. ‘Like Us’ on Facebook by clicking here if you want 24/7 updates on all Newcastle United breaking news.