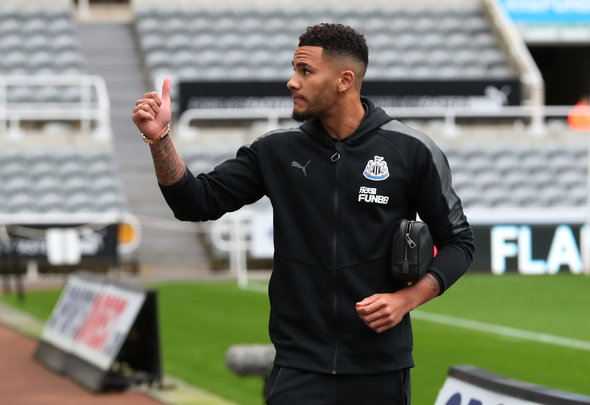 COMMENT
Newcastle United defender and centre back Jamaal Lascelles was a shining example at the heart of defence against Manchester United and that must earn him a call to join England’s World Cup squad.
There have been whispers in the past, especially earlier in the season, that the former Nottingham Forest man could well pick up his first call-up for his country sooner rather than later, but despite such rumours he is yet to make the step up, having made two under-21 appearances.
However, that must change after he outshone two of his rivals for the Three Lions on Sunday, with Phil Jones and Chris Smalling, both mainstays in the England team in recent years, struggling to put in performances anywhere near the quality of the 24-year-old’s.
Gareth Southgate, who was not at St James’ Park but rather at Huddersfield’s ground to see the Terriers take on Bournemouth, will not be able to take in the full magnificence of Lascelles’ display from a replay, but he will no doubt be able to see the struggles shown by the two Manchester United men.
That will include Smalling’s embarrassing dive which was punished by the Magpies netting the decisive goal from the free kick, something that Newcastle fans could never imagine their leader trying to pull off, and he would be crucified if he did.
Lascelles is an out-and-out leader with a no nonsense attitude, and by being named the youngest captain in the Premier League shows that he has the temperament and attitude to succeed.#
Athough he has no experience of international football at a senior level, he would thrive from being thrown in at the deep end, with four friendlies readied prior to their opening game of the World Cup.
In other Newcastle United news, Benitez has delivered an emphatic response to allegations made towards him.