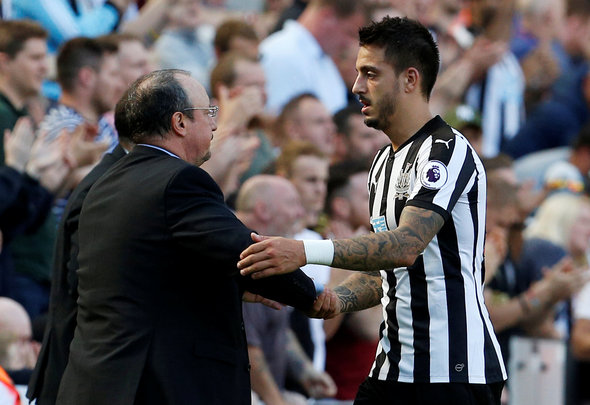 The 27-year-old Spanish forward was one of six senior arrivals at St James’ Park over the summer, joining Dwight Gayle and Aleksandar Mitrovic as manager Rafael Benitez’s options up front.

However, the former Stoke man has claimed that he was forced into making a move by Mark Hughes’ decision to limit his playing time while with the Potters.

He told the Daily Mail: “I had no chance. I scored goals, I played well, but the manager did not give me a run of games.

“He (Hughes) is the reason I’m not there. He didn’t trust me. Now I have a manager who does. When I had the offer to come, it was the only place I wanted to be.”

Joselu, who joined Stoke in 2015 from German side Hannover 96, scored four goals and chipped in with a further four assists in 27 games, but spent nearly the entirety of last season on loan at La Liga side Deportivo La Coruna.

He has enjoyed a bright start to his career on Tyneside, opening his account with a goal in the Magpies’ 3-0 victory over West Ham, with his performances demonstrating why Benitez took the chance to sign him up.

His form has helped him establish himself in the starting XI ahead of both Gayle and Mitrovic, who have suffered with injury and suspension respectively, and the Spaniard looks set to continue leading the line when his former side Stoke visit St James’ Park on Saturday.

In other Newcastle United news, this attacker has revealed why he snubbed the Magpies’ transfer pursuits over the summer.