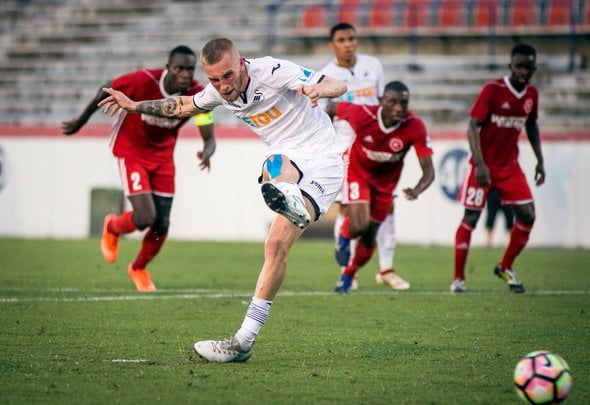 New Rangers signing Jason Cummings has taken to social media to advise Swansea centre-forward Oli McBurnie to join him at Ibrox.
After McBurnie – a well-known Gers fan – congratulated Cummings on his move to Ibrox, the new on-loan forward told him that he was ‘next’ to join the Light Blues.
“Today is a good day…buzzing for you mate I know how long you’ve been waiting for it” said McBurnie, as quoted on his Twitter account.

Today is a good day😂👏🏼 buzzing for you mate I know how long you've been waiting for it👀😂 @Jasoncummings35 💙 https://t.co/1KbDbHySGH

Thanks bro.. your next 💭

The 21-year-old McBurnie has recently broke through into the Swansea first-team, and has played 11 times for the Swans in their battle against relegation from the Premier League. Only time will tell if he is able to ever fulfill his dream of one day playing for the Light Blues.
Cummings is set to make his Gers debut on Sunday in the Scottish Cup tie against non-league Fraserburgh.
Cummings has good memories of the competition, as he played for Hibs in their 3-2 victory over the Gers in the final in 2016.
He will be hoping to add to the four goals he scored in 17 games in his short time in the Championship with Nottingham Forest, and looks a good bet to open his account against a team the Light Blues should defeat comfortably.
The Gers then take on Aberdeen at Ibrox on the 24th of January in a match which could have huge implications in the battle for second place in the Scottish Premiership.
In other Rangers news, Jason Cummings is looking forward to his first Old Firm derby
We’ve launched a << BREAKING NEWS FEED>> exclusively for your club. ‘Like Us’ on Facebook by clicking here if you want 24/7 updates on all Rangers breaking news.