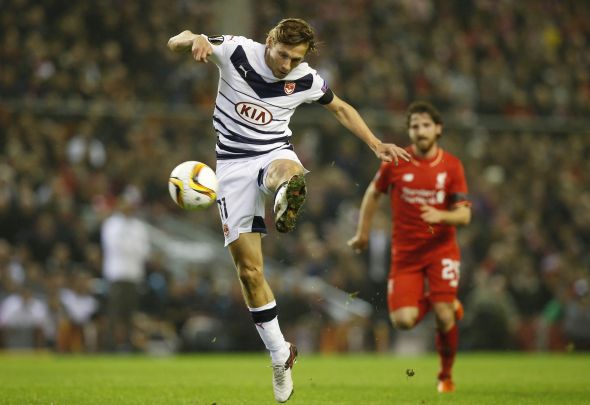 Sunderland and Middlesbrough are chasing the services of French midfielder Clement Chantome, according to reports.

Chantome, 28, is out of contract this summer and will be a free agent after making 35 appearances for Bordeaux this season.

Sport Witness, citing French publication Le Foot Gazzette des Transferts, have claimed the midfielder has been on Sunderland’s radar for a number of months as they look to build on their squad that narrowly avoided relegation last month.

Newly-promoted Middlesbrough are also said to be casting an eye over the France international.

The defensive midfielder moved to Bordeaux from Paris Saint-Germain in January 2015 for £500,000, and the Frenchman’s latest search for a club has prompted interest across Europe.

Chantome’s final year with French champions PSG was spent on loan at Toulouse, where his performances persuaded Bordeaux to buy him from the Parisians.

In addition to interest from the Premier Leagu, reports from French publication L’Equipe claim that the former PSG man is interested in a move to La Liga side Malaga.

Spanish paper Marca  made a similar claim earlier this summer too, while Everton, Stoke and Leicester City have all reportedly kept tabs on the 28-year-old in the past.

Chantome’s lone international appearance for France came from the bench in a 1-0 friendly loss to Japan in 2012.

In other Sunderland news, Jermain Defoe will continue to play for the Black Cats until he is 37.