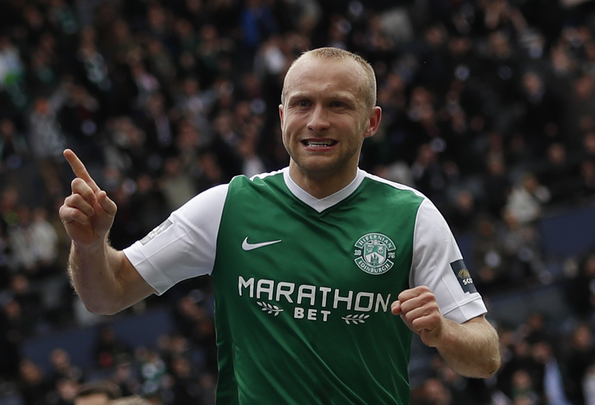 Reported Rangers transfer target Dylan McGeouch has revealed he is “not in a rush” to make a decision over his future – despite his Hibernian contract coming to an end on Thursday.

According to the Scottish Sun, the Gers are interested in bringing the midfielder back to Ibrox – but McGeouch insists he will worry about it later.

The 25-year-old made his Scotland debut in the recent friendly with Peru before featuring against Mexico on Saturday night and insists he;ll think about his future once he returns from Central America.

“I will go back home after these games, sit down with my representatives and take it from there,” McGeouch said, as quoted by the Scottish Sun.

“I am not in a rush to make any decision just now.

“I will worry about what the future holds at a later date.”

The Hibs midfielder has impressed over the last few years and is very much in demand this summer but it doesn’t seem like a move that the Gers need to be making. With an abundance of central midfielders already at the club, McGeouch certainly isn’t good enough to walk straight into the side at Ibrox and it’s not clear that he’d even be a big improvement on those already at the club. With Aberdeen, Blackburn and QPR all credited with an interest, according to the Scottish Sun, the Gers would be better off letting him move down south and try his luck in the Championship rather than bringing him to Ibrox for a second stint with the Light Blues. It wouldn’t be a big surprise to see him try his luck down south either after spells with both halves of the Old Firm before moving to Easter Road a few years ago.