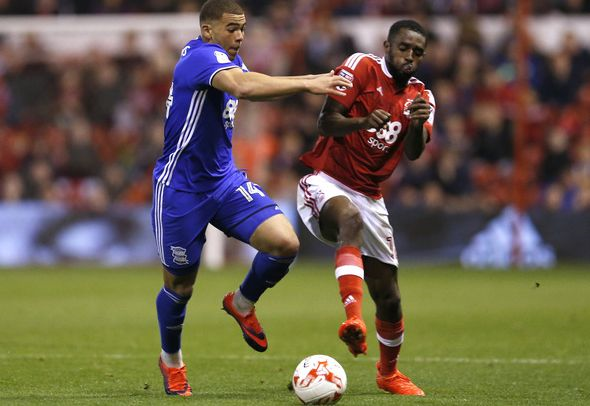 Nottingham Forest caretaker boss Gary Brazil is expected to make just the one change to his side for their upcoming Championship clash with Leeds on Wednesday.

Matt Mills was forced off with a groin injury in Saturday’s victory over Bristol City, and is likely to be replaced by winger Mustapha Carayol, with Brazil opting for a flat back-four.

Forest have been in miserable form this season, but put in a much-improved display on Saturday to hand them their first victory in their last nine league outings, and on Gary Brazil’s first-game in charge.

Philippe Montanier was sacked by the club in the run up to the game, and Brazil was handed the reins as Forest continue their search for a suitable successor.

Following their win, Brazil is not expected to make any drastic changes, and was likely to name an unchanged side had it not been for Mills’ knock.

Therefore, Stephen Henderson is set to continue in goal for Nottingham Forest, having been handed the No.1 jersey for their last three league outings.

Michael Mancinne is expected to partner Jack Hobbs in the heart of the defence, as they look to claim their third consecutive clean sheet.

Brazil was forced to make a change in his midfield last week following the departure of Henri Lansbury to Aston Villa, and David Vaughan is likely to continue in a central role beside mainstay Ben Osborn.

Forward players Matty Cash and Jamie Ward are likely to join the returning Mustapha Carayol in the line-up, hoping to breach an impressive Leeds defence that has kept 10 clean sheets in the league this season.

Britt Assombalonga will lead the line for Forest, looking to add to his six league goals.

A second win in as many games for Nottingham Forest could see them continue their rise up the table to 15th. Defeat, meanwhile, will do little to ease their relegation fears, with just a five-point cushion above the relegation zone.

In other Nottingham Forest news, Barnsley manager Paul Heckingbottom has been installed as Sky Bet’s favourite to take over at Forest.