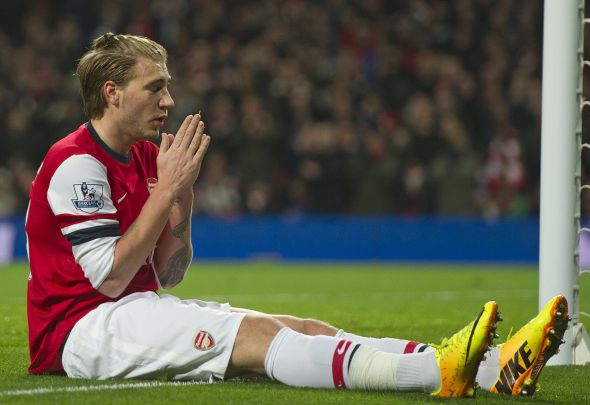 Nottingham Forest fans can’t contain themselves on Twitter as new signing Nicklas Bendtner is in line to start for the Championship giants on Wednesday night.

Denmark international Bentdner signed on a free transfer with Philippe Montanier’s side after being released by German giants Wolfsburg following breaches of discipline with the club.

As quoted by BBC Nottingham Sport’s official Twitter account, Montanier revealed that the 73-time Denmark international could be line to lead the Forest attack against Championship minnows Rotherham, despite not even making the bench against Aston Villa on Sunday.

Bendtner looks set to be involved tomorrow, with Montanier saying: "I think Nicklas is ready to help the team tomorrow." #nffc

Former Juventus loanee Bendtner will be looking to develop some match fitness, with one eye on September 20 as Forest face the Gunners in the third round of the EFL Cup.

Fans have reacted with excitement on Twitter, as Bendtner could be the man to spearhead their club’s attack.

BENDTNER IN THE SQUAD #nffc

One fan made an intriguing point that if the talismanic striker does find the back of the net, he could equal Derby’s total goals for the season; which stands at just one goal from seven games.

Bendtner, who has 29 international goals, moved to the Bundesliga in 2014 after his contract with the Gunners expired, but he could be set for a sensational return to English football.

Bendtner scored 47 goals and supplied 22 assists in 171 appearances for Arsenal and added a further nine goals in 47 matches for Wolfsburg. He scored 20 more goals during loan spells with Sunderland, Birmingham and Italian champions Juventus.

In other Nottingham Forest news, this emerging star has given a Twitter verdict after a scan on his latest injury.