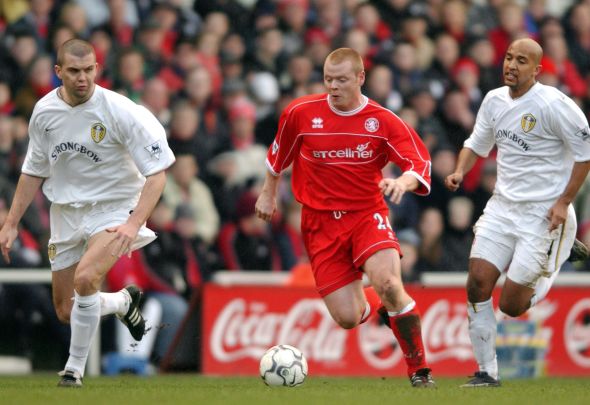 Olivier Dacourt has claimed he made Dominic Matteo “famous” during Leeds’ wonderful Champions League run during 2000-01.

The Frenchman was a crucial part of Leeds’ young side under David O’Leary that reached the semi-finals of the Champions League 16 years ago, before losing to Valencia over two legs.

Matteo revealed on his personal Twitter account that 16 years ago to the day, Leeds smashed European giants Anderlecht 4-1 in Belgium, writing “what a performance”.

Ex-midfielder Dacourt, who went on to play for Inter Milan and Roma, replied humorously that he made Matteo “famous” during that “special year”.

Leeds progressed to the last eight of the Champions League with that win in Belgium, thanks to a brace from academy product Alan Smith as well as goals from Mark Viduka and Ian Harte.

The Yorkshire giants progressed to the knockout stages after coming through the first group stage that included Barcelona, AC Milan and Besiktas.

Leeds then saw off second group stage rivals Real Madrid, Lazio and Anderlecht to reach the last eight, with the new format of the competition not installed until 2003-04.

Dacourt and Matteo starred alongside the likes of Rio Ferdinand, Harry Kewell and Eirik Bakke as Leeds blew away their European rivals before losing to Valencia in the last four.

A 21-time France international, Dacourt played for Leeds for three years between 2000 and 2003, while ex-Liverpool and Blackburn ace Matteo made 139 appearances for the Whites.

In other Leeds news, Pablo Hernandez has had his say on two of Leeds in-form stars.