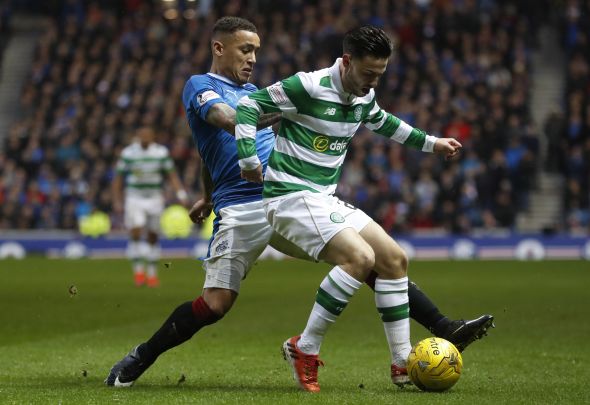 Patrick Roberts has revealed he has enjoyed his time at Celtic on loan from Manchester City as his temporary deal begins to wind down.

Roberts, 20, will see his 18-month loan come to an end on May 31, with his last Hoops match potentially set to be the Scottish Cup final on May 27 if they beat Rangers in the semi-final.

Speaking on Celtic’s official Twitter account, Roberts stated that he wants to show how much the club means to him in his last few games as a Hoops player.

“I have enjoyed my time, I have loved it. We still have a few games to go now and I want to do well,” Roberts said. “Celtic have been brilliant with me, it is a massive club.”

💬 PR on life at Celtic: "I have enjoyed my time, I have loved it. We still have a few games to go now and I want to do well."

💬PR: "Celtic have been brilliant with me, it is a massive club."

Roberts gave no indication that his stay on Parkhead would be made permanent, as he continues to warm the hearts of Celtic fans with his attacking displays.

Celtic’s number 27 scored his sixth goal of the season on Sunday as the Hoops won their 48th Scottish Premiership title with a 5-0 win against Hearts on Tynecastle.

Roberts scored a sublime left-footed effort that curled into the net for Celtic’s fourth, while Scott Sinclair bagged a hat-trick and Stuart Armstrong scored his 13th goal of the season.

With a contract at the Etihad until the summer of 2020, it seems unlikely that Celtic will be able to complete a deal for the former Fulham attacker as he cost City £12million.

Roberts is expected to feature in Celtic’s next game against Patrick on Wednesday, as they look to maintain their unbeaten record and beat the points record set by themselves in 2001-02.

In other Celtic news, these three were the Hoops’ worst performers against Hearts.