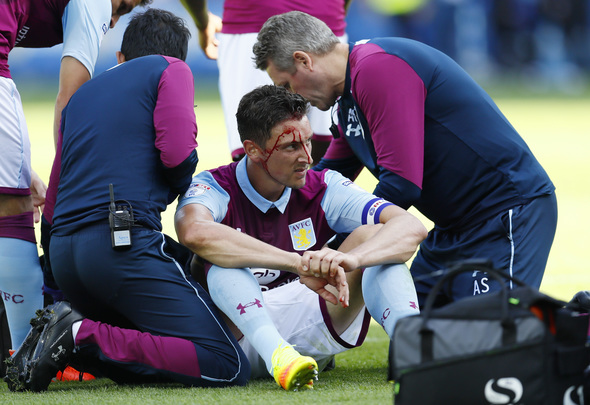 Paul McGrath singled out Aston Villa captain Tommy Elphick as the club’s top performer in their 1-0 defeat against Sheffield Wednesday on Sunday.

Despite Fernando Forestieri scoring a late winner after a pouncing on a mistake from Villa goalkeeper Pierluigi Gollini, Elphick delivered a strong and commanding display in what was his debut for the club since his £3million switch from Bournemouth.

Elphick required treatment to his head when he clashed with Wednesday striker Steven Fletcher in the first half which forced the latter off with what looked like a serious head injury.

Ex-centre-back McGrath praised the mind-set shown by the club’s leader and in particular the passion he showed throughout the game for the badge.

“Elphick was MOTM for me, love the attitude he showed,” McGrath told his Twitter followers.

“Connecting with the supporters, well played son. Things can only get better. Gutted with Sheffield’s winner, sooner Villa get a win, any win, things will change.”

Elphick was MOTM for me , lv the Attitude he showed , connecting with the supporters well played son . Things can only get better #UTV.

Gutted with Sheffields winner , Sooner Villa get a win any win , things will change #UTV.

Holte-End hero McGrath, notched up 556 appearances in all competitions during his 17-year career and is now regarded as one of the best defenders to have played the game.

Elphick showed great quality throughout the game, with last ditch tackles and vocal efforts to lift the team after Forestieri’s late winner.

The 28-year-old will now try and lift the team ahead of Villa’s opening Championship home fixture against Rotherham on August 13.

In other Aston Villa team news, owner Tony Xia has revealed the two players who are close to a first-team return.