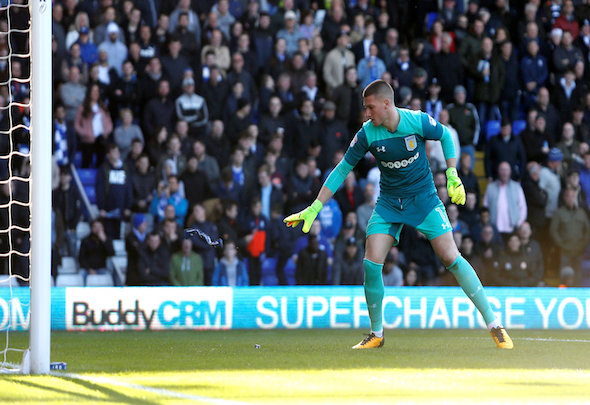 West Bromwich Albion are set to pursue Aston Villa goalkeeper Sam Johnstone during the January transfer window, according to a report.

The Sun claims that the Premier League outfit are desperate to find competition for number one choice Ben Foster and they believe that the 24-year-old is the perfect man for the job.

The newspaper reports that West Brom are set to make a £5million bid for the goalkeeper who is currently on loan from Manchester United this season.

The report claims that the Championship side are also keen to secure the shot-stopper on a permanent deal.

However, Villa boss Steve Bruce has placed Newcastle United goalkeeper Karl Darlow as a potential alternative should he fail to agree terms with Johnstone.

Johnstone impressed during his January loan spell at Villa Park last season, featuring in 21 appearances and keeping eight clean sheets in the process.

The Midlands club decided to snap him up on loan once more this summer and he has been a first-team regular during the season.

The goalkeeper has made 17 Championship starts for Villa, making a total of seven clean sheets.

Johnstone’s current contract at Old Trafford runs out at the end of this season.

It will be a massive blow to Villa if Johnstone decides to leave the club in January and secure a permanent deal to the Premier League. The goalkeeper has been a fixture in the first-team squad this season and he has demonstrated that he can be difference in Villa securing a place back to the English top-flight next season. With the likes of David de Gea and Sergio Romero the preferred choices at Old Trafford, it’s clear that Johnstone will need to leave the Manchester club in order to further develop his career. However, his head shouldn’t be turned and it’s best for him to stay at Villa Park in order for him to enjoy minutes on the pitch.

In other Aston Villa news, this Premier League powerhouse is eager to move to the Villains in January.