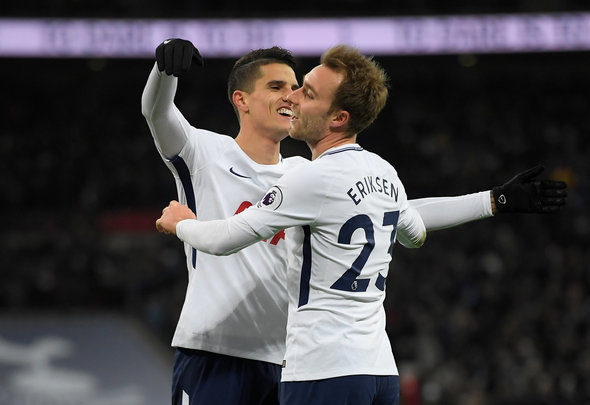 Mauricio Pochettino has admitted that he is considering sending a senior player out on loan to make way for Erik Lamela in Tottenham’s Champions League squad.

Lamela was not included in the 25-man squad named at the beginning of this season because of his long-term hip injury, but the Argentine has now recovered and made his way back into first-team contention.

UEFA regulations stipulate that it must be a foreign player which makes way from the squad, with 17 non-locally trained players allowed.

Speaking ahead of Spurs’ clash with Burnley, Pochettino admitted that he was considering a loan move for a foreign player in order to accomodate Lamela, with Georges-Kevin N’Koudou the figure most likely to miss out.

As quoted by the Guardian, he said: “We are thinking about it – I cannot lie. We will see what happens regarding ins or outs in January because we need to consider how to provide one place to Erik.

“Will I loan a player out? We are going to consider that. We will see what happens because when January arrives, different players have different ideas, different challenges. If we want to provide Erik with a place, we need someone [to go out]. We have time until the end of January.”

UEFA’s regulations caused Pochettino a headache at the beginning of the season, as he had 19 foreign players at his disposal, and he ended up loaning out Vincent Janssen alongside leaving Lamela out of the squad.

Lamela has looked lively when involved for Spurs since his return, and made an instant impact last weekend against City, despite Spurs going on to suffer a heavy defeat.

N’Koudou on the other hand has also looked decent after forcing his way into contention by improving his attitude, and scored his first goal for the club against Apoel Nicosia in the Champions League.

He is however the player that is expected to make way in the squad for Lamela, and a January loan looks likely for the young Frenchman.

In other Tottenham Hotspur news, Spurs are the joint-favourites to sign this PL speed machine in January.